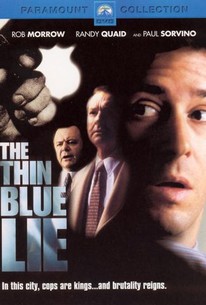 In this made-for-cable drama, Rob Morrow plays Jonathan Newman, a journalist who is covering a high-profile homicide. Newman discovers that inappropriate action by the police was a key factor in the crime, and he soon finds that his life is in danger as he tries to ferret out the truth. Produced for the Showtime premium cable network, The Thin Blue Lie also stars Randy Quaid, Paul Sorvino, Cynthia Preston, and Al Waxman.

Ray Doucette
as Bartender
View All

There are no featured audience reviews yet. Click the link below to see what others say about The Thin Blue Lie!