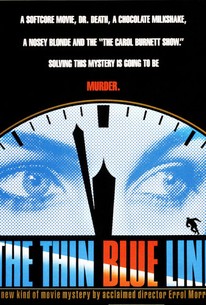 This is the fascinating, controversial true story of the arrest and conviction of Randall Adams for the murder of a Dallas policeman in 1976. Billed as "the first movie mystery to actually solve a murder," the film is credited with overturning the conviction of Randall Dale Adams for the murder of Dallas police officer Robert Wood, a crime for which Adams was sentenced to death. With its use of expressionistic reenactments, interview material and music by Philip Glass, it pioneered a new kind of non-fiction filmmaking. Its style has been copied in countless reality-based television programs and feature films.

The Thin Blue Line is one of the films that helped make documentaries a viable entertainment option for arthouse moviegoers during the indie-film boom of the 1980s and '90s.

Although The Thin Blue Line assembles an almost inassailable case... it is not a conventional documentary -- not a feature-length version of one of those 60 Minutes segments in which innocent men are rescued from Death Row.

Documentaries have changed minds, championed causes, and even reversed policy, but The Thin Blue Line (1988) may be the first film to free a man from prison.

...engaging as a procedural and compelling as a meditation on the nature of truth.

Morris was working in a dangerous middle ground between the traditional documentary and the fictional feature film, and his merging of various techniques paid off in a film of singular uniqueness in both its aesthetic approach and its real-world impact.

The Thin Blue Line is proof that sometimes, though rarely, the political impact of a film can be as tangible as an innocent man being freed from prison.

Arguably no other film of the 1980s, fiction or non-fiction, was as significant in blurring the boundaries between what's reel and real and in demonstrating the remarkable impact a movie could have.

Accomplished but detached; you're pulled in, but you couldn't be blamed for resisting.

Furthering its genre irregularity, it employs no narration to guide the viewer, and each shot is carefully static and composed. Its central scene, even, is a fabricated element in what is largely a non-fiction film.

Errol Morris has brought true crime documentaries to a high-quality level with this influential, mind-changing and at times quite scary film that offers some compelling evidence of how flawed the American justice system is and how easy it is to convict an innocent man of murder.

Morris' central achievement in my opinion is placing the viewer non-partially into the judge's chair and, in very, very quiet tones, simply asks you to be the judge, to make a decision: who is the murderer here? The evidence is placed before you without fanfare; the murder, the accused, the suspected, the witnesses, the suspicions, the allegations, the conjecture, the blame. I was in the midst of deciding before I realised how skillfully I had been made to give a damn.

"A softcore movie, Dr. Death, a chocolate milkshake, a nosey blonde and "The Carol Burnett Show." Solving this mystery is going to be murder." A film that successfully argued that a man was wrongly convicted for murder by a corrupt justice system in Dallas County, Texas.

REVIEW
The film happened almost by accident: Morris became sidetracked while researching another project and began to investigate, on film, the case of Adams and Harris, two strangers whose paths crossed in Dallas one night in November of 1976. What the documentary maker discovered from his own methodical accumulation of clues, rumors, and offhand testimony was an overwhelming case against the young drifter David Harris, who clearly fingered Adams for his own crime. Morris was aided by a convincing and articulate defense presented by Adams himself, whose calm recitation of facts is often more hypnotic than the ominous Philip Glass music score. Director Errol Morris reconstructs the case using old film footage, odd graphic digressions, dramatic reenactments, and interviews with almost everyone involved, including the likely true killer, who tacitly admits his guilt in the final scene. The film is more artfully arranged than most documentaries, and yet is so honest in its pursuit of the truth that it proved instrumental in correcting a miscarriage of justice (after it opened, the case against Harris was reopened, and eventually overturned). The director himself remains (as usual) all but invisible throughout the film, except for his trademark deadpan irreverence (the word blue in the title is colored red, and so forth). A tragic miscarriage of justice would seem an inappropriate source of laughs, but the streak of dark humor underlines the sometimes absurd workings of an imperfect legal system.

A disturbing look at a judicial system infected with chaos and corruption, specifically in the true story of an innocent man named Randall Adams who is sentenced to life in prison for a murder he did not commit. Instead of feeling the need to put his own stamp on the story, director Errol Morris, like he did in "Gates of Heaven", elects to let the people tell the whole story. The result is a detached though interesting case of a good man who got caught in the wrong spot at the wrong time. The negligence by the Dallas County Police is nothing short of repulsive, as they continually ignore the facts of the man they should be going after, instead looking for a quick fix find to nab someone so that they can find closure for the murder of one of their own policeman. It feels longer than it is at 100 minutes, and I would have liked some sort of way to feel more attached and emotionally invested to the story, but I still found myself interested and wanting to see Adams let go. It did not happen when this film came out originally, but the influence of this movie was so great that it prompted the case to be re-opened, and Adams was released in 1989. In addition to providing a saddening story about a chunk of a man's life ruined by a lazy judicial system, this movie also serves as a testament to the power and influence film can have on our society. It can free a man from prison.