The Thing About My Folks2005 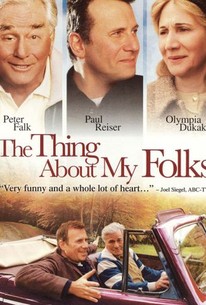 Critics Consensus: The Thing About My Folks lacks cohesiveness, and the cloying tone makes the talkiness grating.

Critics Consensus: The Thing About My Folks lacks cohesiveness, and the cloying tone makes the talkiness grating.

Critic Consensus: The Thing About My Folks lacks cohesiveness, and the cloying tone makes the talkiness grating.

The Thing About My Folks Photos

A middle-aged man finds himself dealing with the divorce of his elderly parents as well as many years of emotional baggage in this poignant comedy drama. Ben (Paul Reiser) is a writer who is enjoying a quiet evening at home with his wife, Rachel (Elizabeth Perkins), when they receive an unexpected visitor, Ben's father, Sam (Peter Falk). As it happens, Sam has some surprising news -- his wife, Muriel (Olympia Dukakis), has left him, leaving behind a note saying she wants some time alone. While Ben gets in touch with his sisters, who immediately set out to track down Muriel, he is left to deal with Sam while he tries to figure out what has gone wrong. Eager to spend some time with his dad to talk things out, Ben invites Sam along for a trip upstate to look at some property he's interested in buying, and as the two men hit the road, they get a chance to get to know one another in a way Sam, a busy salesman, was unable to do when Ben was a boy. The Thing About My Folks was a pet project for Paul Reiser, who wrote the screenplay as well as playing the lead; he'd had the script in the works for 20 years, and always intended for Peter Falk to play the role of Sam.

Critic Reviews for The Thing About My Folks

Reiser, a famous face from the long-running TV series Mad About You, here proves himself to be a skilful writer and actor for the big screen.

Two men of very different generations coming to understand and appreciate each other makes for some fine moments. And that's just the actors.

If you've ever wondered what it would feel like to be trapped in a '36 Ford convertible for 47 years with a Yiddish theater version of Dr. Phil and the runaway bride, this is the movie for you.

If you thought Mad About You was cloying and gaggingly cute, this could give you the dry heaves.

About as entertaining as the yearly family argument, without any of the holiday turkey to make it worthwhile.

If you leave The Thing About My Folks thinking about your own folks, consider the movie a success.

Reiser has given us a film that makes us laugh while contemplating the ways we understand and misunderstand those we love.

The film is a little saccharine and never as moving as Reiser expected. I know Reiser loves his father, but I didn't need to pay to be told it.

The Thing About My Folks contains more sap than a Vermont maple.

...provides [Falk] with an opportunity for his best work in a a Hollywood film since the hilarious and underrated Big Trouble (1986).

The truth about this sweet, rather shambling little movie is somewhere between the gush and the criticism.

Audience Reviews for The Thing About My Folks

What an amazing and magnificent movie. It`s hilarious, deeply moving and utterly satisfying. A masterpiece of comedy and drama well rounded into a real joy of a film. Some of the best and most realistic character work i have ever seen ina film. It delivers unstoppable laughs from start to finish. Peter Falk and Paul Reiser give outstanding and beautiful performances. Falk is brilliant, he gives one of the bet screen performances of 2005. Weiser is excellent, he writes as well as performs superbly in this film. A stunning and well-crafted picture.

I loved the movie!! Very entertaining.

Fantastic job by the two leads... Everyone can relate to what these people go through.

Wow, what a great surprise. Peter Falk is another much under-appreciated actor. And thank you Olympia Dukakis for reaffirming my faith in your ability. How ironic to see this just after seeing her in that horrific Picture Perfect -- another indication of how bad the direction was in that movie.

This one is well worth the time, flixsters, for family, for love, for the time-honored tradition of growing old. Peter Falk is a genius.

The Thing About My Folks Quotes