Things Behind the Sun2001 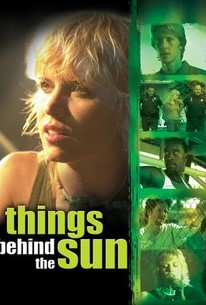 Things Behind the Sun Photos

Writer and director Allison Anders, who used the world of rock & roll as the backdrop for her films Border Radio, Grace of My Heart, and Sugar Mountain, returns to the music scene for this tale of a woman struggling to come to terms with an emotionally devastating past. Sherry McGrale (Kim Dickens) is a punk-influenced singer and songwriter whose angry, deeply personal music has begun to win her a national following, though the demons that fuel her art are playing havoc with her life, as she drowns her sorrows in drugs and alcohol and fills a growing police blotter with arrests for disorderly conduct. Sherry is winning significant airplay for a song about the brutal rape of a young woman, and rock journalist Owen (Gabriel Mann) convinces his editor Pete (Rosanna Arquette) to assign him a major story on Sherry when he tells her he knows the truth about Sherry's own rape as an adolescent, which inspired the song. Owen is forced to run interference with Chuck (Don Cheadle), Sherry's manager and former boyfriend who is fiercely protective of his fragile client, but Owen is still able to meet with the singer. However, Owen finds that Sherry either can't or won't remember most of the details of the brutal and degrading assault, and she doesn't want to discuss the heavy toll it's taken upon her. Influential experimental rock group Sonic Youth contributed several original compositions for the film's score; Sherry's singing voice was provided by Kristen Vigard, who performed on the soundtrack of Grace of My Heart.

Rob Sullivan
as Bystander
View All

Critic Reviews for Things Behind the Sun

Not the least astonishment in Things Behind the Sun is that much of it is remembered and imagined from the point of view of one of the rapists.

A film of remarkable honesty and courage.

Anders takes a hard look at questions of memory, guilt and recuperation.

After several disappointing films, Allison Anders has made a nother personal film that thematically is linked with her first (and best) feature, Gas Food Lodging.

Feels as surprising as the truth often does.

Anders makes the point without belaboring it and without exploiting it for a turn-on.

At its core are three remarkable performances.

This is a hard film to watch, and yet it adheres to a perspective important for both men and women to see.

Audience Reviews for Things Behind the Sun

This is a very brave, honest look at the long term effects of rape, both on the victim and on an unwilling victimizer. The fact it chooses to explore both angles is impressive, but there is much more to be found here as this is not at all a 'message' film. For example, I'd be hard pressed to name a film that is more in love with music, both specific songs and of it, the creative process behind it, the act of composing, the finished product, everything. This is the kind of film that understands how a song can, in a few minutes, often express much more than all the dialogue in the world, how the right music can have such a long lasting effect on a person. This film is remarkably powerful, with scenes of such searing honesty that they cut right to the bone of the viewer. The ending is as 'uplifting' as the circumstances allow, presenting the characters with the opportunity to grow from their experiences and look to a brighter future, but the last song is heartbreaking, reminding the audience of just how much these characters lost that one night, and how much they can never regain.

[font=Century Gothic][color=red]"Things Behind the Sun" is an autobiographical movie from Allison Anders(Grace of My Heart; Gas Food Lodging) that was first shown on Showtime. It starts out in Cocoa Beach, Fl with Sherry McGrale(Kim Dickens, in a brave, great performance) making an annual drunken odyssey to a house. Now she is on probation under the watchful eyes of her caring manager(Don Cheadle, yet another typically excellent performance). Sherry has written a song about being raped as a young girl which is making the rounds of college radio stations.(This reminded me of Tori Amos' song "Me and a Gun.") Meanwhile, Owen(Gabriel Mann), a journalist for Vinyl Fetish Magazine in Los Angeles, claims to know who raped Sherry and returns to Florida.[/color][/font] [font=Century Gothic][color=#ff0000][/color][/font] [font=Century Gothic][color=#ff0000]"Things Behind the Sun" is a very powerful movie about rape and how it negatively effects everybody involved, even years down the road. I especially liked the fact that it does not shy away from some of the more unpleasant parts of the story, thus keeping the story even more real. It does falter a bit towards the end, though. Allison Anders makes a better use of music here than she did in "Grace of My Heart". Eric Stoltz is extremely good in a short role, playing a convict.(And I apologize if I insinuated that he could not handle a serious dramatic role in my review of "House of Mirth." Apparently he can...) And it's nice to see Patsy Kensit in anything.[/color][/font] [font=Century Gothic][color=#ff0000] [/color][/font]

Things Behind the Sun Quotes