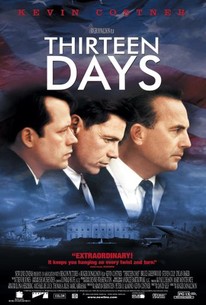 Critics Consensus: Thirteen Days offers a compelling look at the Cuban Missile Crisis, and its talented cast deftly portrays the real-life people who were involved.

Critics Consensus: Thirteen Days offers a compelling look at the Cuban Missile Crisis, and its talented cast deftly portrays the real-life people who were involved.

Critic Consensus: Thirteen Days offers a compelling look at the Cuban Missile Crisis, and its talented cast deftly portrays the real-life people who were involved.

For thirteen extraordinary days in October of 1962, the world stood on the brink of an unthinkable catastrophe. Across the globe, people anxiously awaited the outcome of a harrowing political, diplomatic and military confrontation that threatened to end in an apocalyptic nuclear exchange between the United States and the Soviet Union. The alarming escalation of events during those fateful days brought to the fore such public figures as Robert McNamara, Adlai Stevenson, Theodore Sorenson, Andrei Gromyko, Anatoly Dobrynin, McGeorge Bundy, Dean Acheson, Dean Rusk, and General Curtis LeMay. In addition many others -- politicians, diplomats and soldiers -- were on the front line of the showdown. In Thirteen Days, we see all of these people, -- and, above all -- President John F. Kennedy and his brother Bobby, through the eyes of a trusted presidential aide and confidante, Kenneth P. O'Donnell.

Shawn Driscoll
as U2 Pilot

Liz Sinclair
as Kennedy Assistant No. 1

Colette O'Connell
as Kennedy Assistant No. 2

Marliese K. Schnieder
as White House Operator No. 2
View All

An outstanding movie for families with older kids.

A fitting dramatic tribute to the deadly brinksmanship that pulled us back from the edge during the most volatile two weeks of the Cold War.

Thirteen Days is a good movie about a profound moment in world history.

Who would've thought this nearly 40-year-old piece of history could be turned into such a riveting motion picture?

Thirteen Days is more suspenseful than the car crashes and breathless chases of most run-of-the-mill action movies.

Kennedy fans might appreciate Thirteen Days for what it is but the film could do better in putting the right faces up front.

I find vertiginous and very palpitating what happens in this political thriller, directed by Roger Donaldson, about one of the most tense moments of the Kennedy administration: the Cuban missile crisis. [Full review in Spanish]

It really is the Cuban Missile Crisis played out on a grand scale, and, in some respects, this grandiosity is permissible.

a slightly more accurate mythology of the Cuban Missile Crisis

"Days" terrifically evinces those days' timorous uncertainty of whether Red dread over ending the world matched Yankee angst. The knowing glances at its conclusion speak volumes: The planet's lucky break had only to do with random chance.

Suspenseful and efficient--to the point that it feels like a soulless, though remarkably well-calibrated, machine.

Great script, better than average costumes, decent acting (I say that even with Kevin Costner in a leading role!), good directing -- and lots of historical drama. "Thirteen Days" is the Cuban Missile Crisis lesson you wish you'd had in high school.

"If the sun comes up tomorrow, it is only because of men of good will. And that's - that's all there is between us and the devil." A dramatization of President Kennedy's administration's struggle to contain the Cuban Missile Crisis in October of 1962.

REVIEW
In the 1960's few realized how close the world came to Nuclear Winter. Even today, with all the resources at hand, fewer care who prevented the Third World War. One thing is certain, America was enormously fortunate to have had as President of the United States, John F. Kennedy (Bruce Greenwood) during those nearly fatal "Thirteen Days." As the thinking man's president, Mr. Kennedy was lucky to have in his cabinet men of intellect and reason. His main confidante was his younger brother, Robert Kennedy (Steven Culp) who proved invaluable as Attorney General. When the world learned of the Nuclear threat ninety miles away, Kennedy came to rely heavily on his political adviser Kenny O'Donnell (Kevin Costner) who displayed cautious insight and prudent judgment in critical moments which could have proved disastrous had the Joint Chiefs of Staff gotten their way. Further, Kennedy was definitely fortunate to have selected as his ambassador to the United Nations, Adlai Stevenson (Michael Fairman) who stood toe to toe with Russian's Valerian Zorin (Oleg Vidov) and did not back down. The film is dramatic and terrifyingly accurate with dated Black and White footage and actual verbal scripts from hidden recordings from the oval office. What we know today is; had the Administration followed the prodding of the military, they would have initiated the Third World War as the Russian military in Cuba, actually had short range Atomic warheads at their disposal. This is a frightening film for rational people.

Great film! A movie that I've watched at school that was legit, not a lame educational movie. A very good adaptation of the drama and conflict behind the Cuban Missle Crisis. Fueled mostly by great performances and powerful dialogue, this film is a great historical drama. The emotion and intensity in the story is very believable. We truly were on the brink of war, and this film I believe captures a realistic look into what occured. I recommend this film to everyone, especially History buffs.

As far as I'm concerned, this is director Roger Donaldson's greatest film. Thirteen Days is set during the two week long Cuban missile crises of October 1962. Thirteen Days is a powerful dramatic thriller about those events, that brought the world near a nuclear war. A very tense, suspenseful film, Thirteen Days is an impressive film, and we see how the American government try to handle the more than fragile situation. Because after all, this was at the high of the cold war. Director Roger Donaldson does a phenomenal job at building up the tension throughout the film. Donaldson is so good at tension building that you cannot look away from the film because you want to know how all this will end. Thirteen Days is one of the few films that I have seen that brilliantly builds up its thrills and suspense to a very good climax. The cast is well chosen and the best performances here are Kevin Costner and Bruce Greenwood.. These are the two who really deliver on screen, but theres not a single bad casting choice. Thirteen Days is one great dramatic Thriller about one of the most tense two weeks of the entire cold war. Roger Donaldson has delivered a great film thats definitely not boring, even though theres a lot of talking involved. The film will keep you on the edge of your seat from beginning to end and is a terrific thriller supported by a great cast of actors. Thirteen Days is an excellent film that sheds light on those drastic, tense two weeks of October 1962. This is a film that very powerful and compelling, a very interesting depiction of a dark time in history.