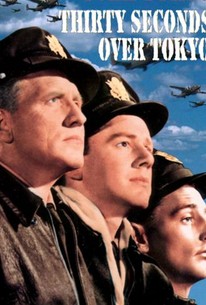 Based on a true WWII story, this film follows the first American attack on Japan after the attack on Pearl Harbor. The movie boasts an all-star cast, led by Spencer Tracy, who plays General Doolittle, the leader of the American air-raid.

Will Walls
as Hoss Wyler

After an overly mushy first half, the movie redeems itself with a second act that is decidedly dark and dreary and an extended air combat sequence that's still amazing nearly 70 years later.

It's winsome because of its sincerity, painting a sympathetic portrait of the men who carried out this dangerous mission.

Some of the footage of the scenery flying by on the way to this historic bombing run is way ahead of its time. Robert Mitchum on the rise. Van Johnson established.