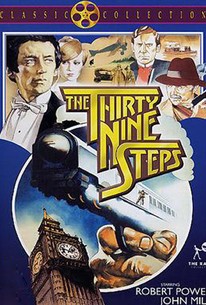 This 1978 re-remake of The 39 Steps adheres more closely to the source novel by John Buchan than Alfred Hitchcock's better-known original, restoring the pre-World War I time frame of the Buchan story. Hannay (Robert Powell) is an innocent bystander, suspected by enemy agents of having intercepted their secret war plans. Pursued by both the spies and the police, Hannay runs for his life in the company of Alex (Karen Dotrice). The Thirty-Nine Steps ends with a "high and dizzy" sequence on the face of Big Ben, borrowed from the 1942 Will Hay comedy My Learned Friend.

Artro Morris
as The Scott

Michael Bilton
as Vicar
View All

I actually enjoy more of this version of the Buchan novel than the Hitchcock version, possibly due to the set-pieces like the climax on Big Ben and the paralysis scene in the health spa. Powell is a very good Hannay and I'd be keen to see him as the same character in the TV series that followed. The direction isn't as flashy as the Hitchcock version and it's more like a TV movie than a big screen version but with a strong cast and some good sequences this is well worth checking out.

Although the Hitchcock version is superior, this does have its moments.