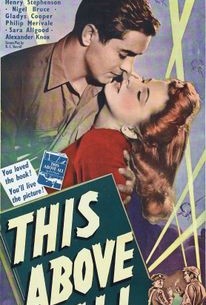 This Above All Photos

In this film, Tyrone Power plays a conscientious objector, who deserts the British army because he doesn't believe in fighting to preserve his country's oppressive class structure. But Power is no coward, and through the love of Joan Fontaine, he realizes that love of one's country supersedes all social outrage.

Brenda Forbes
as Mae the Singer

May Beatty
as Customer

Will Stanton
as Bartender

Andy Clyde
as Fireman
View All

Critic Reviews for This Above All

There are no critic reviews yet for This Above All. Keep checking Rotten Tomatoes for updates!

Audience Reviews for This Above All

Stolid soaper miscasts Ty as an English deserter, he exerts zero effort to seem British, and saddles Joan Fontaine with a lot of flag waving speeches which stop the film dead in it's tracks. Professionally made with a good supporting cast but uninvolving.

This Above All Quotes