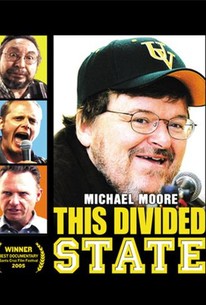 Critics Consensus: This Divided State takes a flawed yet engrossing ground-level look at how ideological differences can fuel discord -- and how quickly it can spread.

Critics Consensus: This Divided State takes a flawed yet engrossing ground-level look at how ideological differences can fuel discord -- and how quickly it can spread.

Critic Consensus: This Divided State takes a flawed yet engrossing ground-level look at how ideological differences can fuel discord -- and how quickly it can spread.

The state of Utah has long been home to the American headquarters of the Church of Latter-Day Saints (better known as the Mormons), and as befits the straight-laced lifestyle dictated by the faith, Utah tends to be a solidly conservative community and traditionally supportive of Republican candidates. However, many gained a perspective on just how conservative Utah was in September 2004, when filmmaker and leftist activist Michael Moore was invited to speak on the campus of Utah Valley State College in Orem, UT two weeks before the presidential election. While UVSC organizers expected some degree of controversy, no one anticipated the bitter firestorm of criticism that resulted, with many community leaders denouncing Moore and demanding that the event be canceled, with some on the event committee receiving death threats. (Joe Vogel, the student body vice-president who helped spearhead Moore's appearance, happened to be a former Mormon missionary and card-carrying Republican who believed that Moore's right to speak outweighed his own opinion about his views.) One of the most outspoken critics was businessman Kay Anderson, who was especially critical of the fact UVSC were paying Moore an honorarium to speak on campus. Anderson, who told reporters Moore "hates our values and would like to destroy us," offered the school 25,000 dollars to cancel the event. As tempers flared, some supporters of Moore's visit questioned the political influence of the Mormon church in Utah, while others wondered if someone can be a good Mormon and a liberal at the same time. This Divided State is a documentary directed by Steven Greenstreet, who studied at both Brigham Young University and UVSC, which offers a bird's-eye view of the controversy with a number of community and student representatives on both sides of the issue contributing their views.

Sean Vreeland
as Himself

Jim Bassi
as Himself

Sean Hannity
as Himself

Kay Anderson
as Himself

Joe Vogel
as Himself

Ken Brown
as Himself
View All

Critic Reviews for This Divided State

It's a discomfiting film, bringing up all the ugly emotion of last year's electoral shouting match, concentrated in one town in one state and in one short 88-minute film.

As boisterous as it is sobering.

It lacks the substance to sustain its feature-length running time.

No matter where you stand, This Divided State has a patriotic, galvanizing effect.

The 25-year-old filmmaker takes no sides himself. Wisely, he allows folks of all opinions to put their feet in their mouths all by themselves.

The approach to recording the story is everything its subjects aren't.

The intensity of the opposition and the deep fissures it revealed in the fabric of American civil discourse are still astonishing.

If there's a weakness here, it's that there's no challenge whatsoever in making a closed-minded right-wing nutcase look crazy

An interesting and anger inducing documentary.

The problem is that Greenstreet apparently had no idea what kind of movie he wanted to make.

Audience Reviews for This Divided State

There are no featured audience reviews yet. Click the link below to see what others say about This Divided State!