This Is Martin Bonner2013 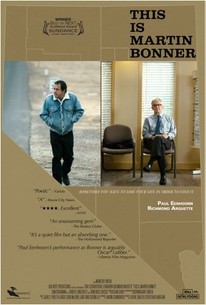 Critics Consensus: Solemn but heartfelt, This is Martin Bonner is a slow-burning drama with an outstanding performance by Paul Eenhoorn as the title character.

Critics Consensus: Solemn but heartfelt, This is Martin Bonner is a slow-burning drama with an outstanding performance by Paul Eenhoorn as the title character.

Critic Consensus: Solemn but heartfelt, This is Martin Bonner is a slow-burning drama with an outstanding performance by Paul Eenhoorn as the title character.

This Is Martin Bonner Photos

The striking sophomore film of writer/director Chad Hartigan, THIS IS MARTIN BONNER is a warm and perceptive meditation on friendship, human connection and getting a second chance at life. Fifty-something Martin Bonner (Paul Eenhorn) leaves his old life behind and relocates to Reno, where he finds work helping released prisoners transition to life on the outside, while trying his hand at speed dating and passing time as a soccer referee on weekends. Meanwhile, Travis Holloway (Richmond Arquette) has just been released from prison after serving 12 years. Surprising both of them, Travis and Martin form an unlikely friendship that offers them reciprocal support and understanding. (c) Official Site

News & Interviews for This Is Martin Bonner

View All This Is Martin Bonner News

Critic Reviews for This Is Martin Bonner

This Is Martin Bonner takes a magnifying glass to everyday goodness and lingering pain, illuminating their contours and complexities but pulling away before the movie can ever burst into sentimental flame.

This contemplative drama draws strength from day-to-day ordinariness and a terrific lead performance from Paul Eenhoorn, yet sadly falls short.

Patience is privileged, nothing is forced, and by the end of this quietly devastating character study, the ordinary has become extraordinary.

By calling on his leads to underplay nearly every moment, Hartigan calls into question our deeply ingrained instinct, as moviegoers, to witness a steady parade of amped-up emotions.

At its best, with its quiet, ominous pace in the early going and its economical distribution of information throughout, the film is reminiscent of Todd Haynes's Safe.

Director Chad Hartigan's hopeful approach to the material, combined with the terrific cast and cinematography, come together to make this one of 2013's quiet triumphs.

As a whole, This is Martin Bonner is a subtle piece of art getting at the heart of the human condition.

Inspiring in a way that movies too often aren't, in that it provides a realistic yet optimistic vision of how someone can positively affect the world around them

Thankfully it avoids the sentimentality of so many other similar redemption indie pics.

A lovely film makes use of fundamental Christian belief, and of lonely men in their autumn years, and of second chances forced upon us, subjects not generally celebrated in Hollywood.

Audience Reviews for This Is Martin Bonner

Martin Bonner(Paul Eenhoorn) is a middle-aged divorced man who lives alone in Reno, Nevada, transplanted from Australia by way of Baltimore. When his grown daughter is not setting him up on blind dates, he volunteers to counsel recently released convicts. The latest is Travis Holloway(Richmond Arquette) who has just been released after a 12-year sentence and is wondering what to do next. Before he looks for a job, Martin takes the opportunity to take him out to lunch. Not much happens in the low key character study "This Is Martin Bonner." Then again not much has to really, as the movie takes its time in setting the mood and getting to know these two lonely men, both at different points in their respective lives. In general, the movie confirms the observation that everybody in Nevada has come from somewhere else, with Martin being imported due to his knowledge of soccer. So, if Las Vegas does get an NHL franchise, they will have to entice Canadians to come south by the busload.

This unexpectedly excellent drama which will slowly draw you in, is written and directed by Chad Hartigan. The film stars Paul Eenhoorn as Martin Bonner, an Australian man in his late 50s forced to relocate to Reno, Nevada for a new job and his attempts to acclimate and make new friends. Through his work at a prison rehabilitation non-profit organization, he meets Travis Holloway (Richmond Arquette), and the two men form an unlikely friendship. The stories of Martin and Travis slowly converge, as the two men meet and find that they have much in common, not the least of which is an unspoken need for encouragement and support. Their unlikely friendship blossoms but is put to the test when Travis betrays Martin's trust in order to reunite with his estranged daughter. This movie premiered at the Sundance Film Festival and won the Audience Award for Best of NEXT. If I have to ask myself why, there is so many things that could contribute to the answer... it was acted with smart restraint and shot with corresponding composure.. this sombre drama was built out of small moments of naturalistic behaviour which were acutely observed... the directing was unobtrusive and sophisticated... secular spirituality in its best! There is more, but even those are enough! If you decide to watch this film you'll be surprised - there is no other option! You will witness uncommon tale of redemption that may leave you with an uncanny sense of peace. Not everything is conventional, and the imagistic approach to narrative will leave some bitter taste with some critics and viewers. It didn't for me, I liked it. (I am really glad that this was my 1100th review!)

Cinematic understatement often comes with schmaltz and a handful of pretensions, but thankfully, 'This Is Martin Bonner' isn't another one of those sappy dramas that independent filmmaking is practically synonymous with. 'This Is Martin Bonner' moves at a slow pace, examining the growth of a friendship between the titular character and an ex-convict, and without the constraints of a narrative, it feels like real life. Paul Eenhoorn and Richmond Arquette are both quite wonderful in this somber debut from director Chad Hartigan, who understands that you don't necessarily need to tug at the heartstrings in order to deliver an inspirational message. He has crafted a low-key character study that doesn't amount to much in terms of entertainment, and it doesn't have much material to cover even its short running time, but it does offer a realistic portrayal of two guys stuck in a rut finding hope in one another. It really leaves you in a peaceful state.

This Is Martin Bonner Quotes