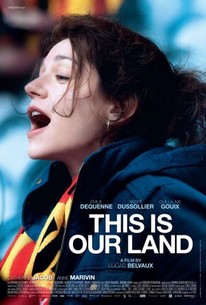 This Is Our Land (Chez nous) Videos

This Is Our Land (Chez nous) Photos

Marine Le Pen was defeated in the French election that brought Emmanuel Macron to power, but her far right-wing party, with its nationalist, anti-immigrant platform, lives on to feed the fear and resentment that begot Donald Trump's election. THIS IS OUR LAND is a fictionalized story of an attractive working-class single mother in the North of France who naively agrees to run for mayor, representing the Patriotic Bloc. Lucas Belvaux, who previously directed RAPT, a terrific thriller about a French politician's kidnapping, deals with another type of kidnapping here: With the help of a charming André Dussollier as the town's esteemed physician, the Populists' rhetoric seizes control of the minds of the electorate. With Catherine Jacob as the blonde-bobbed leader who never met an angry crowd she couldn't make angrier.

Tom Robelin
as Cyril
View All

News & Interviews for This Is Our Land (Chez nous)

Super Troopers 2 Is More of the Same, but in Canada

View All This Is Our Land (Chez nous) News

Critic Reviews for This Is Our Land (Chez nous)

If current American movie audiences showed more of an appetite for this kind of reflective political drama, a stateside remake of this engrossing, disturbingly credible film would seem like a natural.

We are left to rue "This Is Our Land" as an opportunity missed, and to wonder how else the tale could have been told.

This Is Our Land may occasionally try to do too much, but I'd be lying if I said I didn't want someone to make an American version of this film and blast it into every multiplex in the country.

The drama is well-paced, and all of the actors are wonderful.

Belvaux has made a gutsy, discomfiting movie about going along to get along, and just how dangerous that impulse can ultimately be.

Throughout the film, Lucas Belvaux sidelines the emotional textures that might complicate all his sermonizing.

The sad transformation of Pauline develops plausibly with the character constantly oscillating before a proud vanity for being chosen and a blind discomfort for the reactions around her decision.

Lucas Belvaux's film about a French town simmering in right-wing hate is a frightening sign of the times.

This Is Our Land is essential viewing for its damning critiques, even if it is too thematically overblown.

There's not so much a story arc as a mess of ideas that are thrown at the screen; some stick, some don't, which means that This Is Our Land is only ever sporadically interesting.

While too baldly calculated and on-message to rank with Belvaux's best, "Our Land" will see perhaps the strongest returns of his career given the topicality.

There are no featured reviews for This Is Our Land (Chez nous) at this time.

This Is Our Land (Chez nous) Quotes