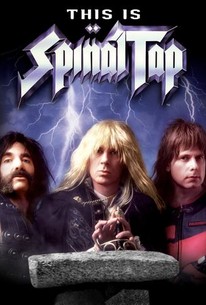 This Is Spinal Tap Videos

This Is Spinal Tap Photos

A spoof about a filmmaker making a documentary about a once-famous, now almost forgotten British heavy metal band returning to the United States after 17 years for a concert tour.

Billy Crystal
as Morty the Mime

Critic Reviews for This Is Spinal Tap

Reiner, with McKean, Guest and Harry Shearer, have done a great job in creating and portraying characters that are dimwitted, cliched and yet oddly endearing.

For music biz insiders, This Is Spinal Tap is a vastly amusing satire of heavy metal bands.

For all its japes and jokes, the movie is really about exhaustion of the spirit: sitting in a bleak hotel suite at 4 a.m. with the bad taste of last night in the mouth and the feeling that tomorrow will not be a better day.

The material is consistently clever and funny, though ultimately the attitudes are too narrow to nourish a feature-length film.

Reiner's brilliantly inventive script and smart visuals avoid all the obvious pitfalls, making this one of the funniest ever films about the music business.

It stays so wickedly close to the subject that it is very nearly indistinguishable from the real thing.

The hilariousness here is unending.

Little riffs of comic genius can be heard amidst the heavy-metal cacophony of This is Spinal Tap...

Documenting the licks and antics of a real band is one thing. Building a movie around a fake one is a challenge of a different order. The key, as Spinal Tap proved, is to fabricate a band that looks, acts and sounds at least as good as the real thing.

This is Spinal Tap is hilarious to everyone who's not a musician. Because as ridiculous and perverse as Rob Reiner's heavy metal mockumentary gets, the slim, 82-minute comedy gnaws at more truths than any other rock 'n' roll biopic put to celluloid.

Yes Nigel, you did go to 11. Where would cinematic comedy be if you hadn't?

Consistently funny, with sheer brilliant turns from every performer on the cast...

Audience Reviews for This Is Spinal Tap

A truly priceless mockumentary filled with numerous hilarious moments that should make you laugh out loud until your belly hurts, relying on a deliciously ironic sense of humor that pokes fun at the rock-and-roll universe (the stars and also the fans) in an always intelligent way.

The best mocumentary ever made. A hilarious ride concerning a slowly desinigrating rock band. To think that some people took this seriously when it first came out is actually frighteningly believable, because the acting is that good. This is an effective satire on the rock and roll genre that features many gags that work effectively. A slim running time is actually ideal this kind of movie as well, Reiner cuts the risk of running the same joke over and over again for a long time period, instead this short running time works out perfectly that it doesn't go overboard into self-indulgence territory. Quite simply this is one of my favorite films and a movie that should not be missed.

Great for someone who loves rock music, like me. The film works because it feels like a legit documentary. Funny thing is, the music that this so called band makes is pretty good. Turn it up to 11 and enjoy some great satire. By the way, be prepared for a lot of dry humor.

REVIEW
The soundtrack itself is stand alone (satirical) brilliance, before we even delve into the mockumentary of the fictitious British band whose speakers are so loud, they go to eleven. Reiner's documentary style film follows the band on its tour of the USA, as they traverse the country playing to half empty houses, experiencing myriad crises (e.g. band members leaving, shows being cancelled) and minor debacles (e.g. the appetisers and set work). Their struggle to deliver a unique brand despite the critics scorn is nothing short of heroic. The principal trio (McKean, Guest and Shearer) are pitch perfect as no-brain rockers with dim ideas and infantile (yet still potent) lyrics ("big bottom, big bottom, talk about mud flaps my girl's got 'em"), led around by their faithful manager (Hendra) enduring every ignominy a touring band could experience from getting lost en route to the stage via the green room to the bass player becoming locked inside a cocoon as part of an act. Director Reiner plays the band's documenter, Patrick MacNee has a cameo as a promoter and Fran Drescher, Billy Crystal, Bruno Kirby, Ed Begley Jr, Howard Hesseman and Paul Schaefer all have bit parts. The documentary style filmmaking, mostly handheld, makes it look even more realistic, and makes the band's antics that much more amusing. The film's slim plot is punctuated by interviews with individual band members (some of the funniest parts of the movie), as well as music videos and live performances of the band's god-awful music. No matter how bad their reputation or their sales or their popularity is, they just keep pressing on, assuming that things will pick up soon, and it is an endless source of amusement watching them rationalize their dropping success rate and coming up with reasons that the band should stay together. This is not Oscar winning material. Not by a long shot. None of the actors in the film were well known when it was made, nor are any of them famous today, but the uniqueness and effectiveness of the comedy and of the film as a whole make it worth while. Fans of all kinds of music, not just metal, can enjoy this very funny comedy.

This Is Spinal Tap Quotes