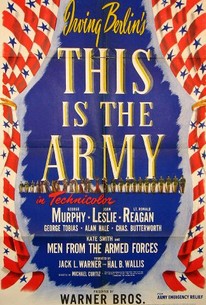 Based both on the play by Irving Berlin of the same name and his musical, Yip Yip Yaphank, this film pays tribute to American soldiers fighting in WW II (though Yip... was aimed at WW I) by providing a plot that includes a big Broadway-like show featuring many musical numbers. The all-star cast includes Ronald Reagan, George Murphy, Stanley Ridges, Kate Smith, Joe Louis and even Irving Berlin himself.

Irving Berlin
as Himself

Kate Smith
as Herself

Joe Louis
as Himself

Victor Moore
as Fathers of Soldier

Ernest Truex
as Fathers of Soldier

Doodles Weaver
as Soldier on Cot

J.P. Mandes
as Magician in Skit

Critic Reviews for This Is the Army

It's never less than fascinating, and there's a lot to be said for the kind of weird history lesson movies like this represent.

A great Fourth of July movie, big and bold and proud.

As American as apple pie.

Audience Reviews for This Is the Army

This Film has President Ronald Reagan in it, a very talented guy. Its a little while before he appears. Its made during WWII so its not as dramatic as most movies of Combat during that Era. Still with President Reagan in it deserves 3 1/2 stars.

This Is the Army Quotes