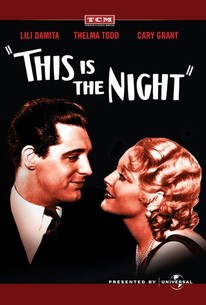 This Is the Night Photos

Cary Grant made his feature film debut in 1932's This is the Night. Grant plays the Olympic-athlete husband of Thelma Todd, who in turn is the object of desire for Parisian millionaire Roland Young. To keep Grant from catching on, Young hires Lily Damita to pose as his wife. Later, Young arranges to catch Grant in a compromising situation with Damita, thus leaving the field clear for Todd. But when Grant falls for Damita, Young finds that he is genuinely jealous! Several chucklesome complications later, all the parties involved settle down with their proper mates. Directed by Frank Tuttle, This is the Night is a reasonable facsimile of Ernst Lubitsch's frothy Paramount comedies, right down to the comic recitative ("Madame has lost her dress! Madame has lost her dress!") built into the musical score. ~ Hal Erickson, Rovi

Critic Reviews for This Is the Night

It's fitting to highlight the wit and charm of Lily Damita, an artist whose talent had not been very well used in previous productions. [Full review in Spanish]

There are no featured reviews for This Is the Night at this time.

This Is the Night Quotes