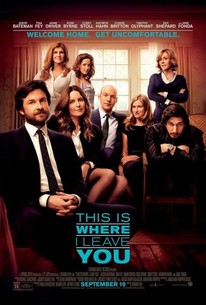 Critics Consensus: This Is Where I Leave You has its moments, but given the amount of talent assembled onscreen, the rather pedestrian results can't help but feel like a letdown.

Critics Consensus: This Is Where I Leave You has its moments, but given the amount of talent assembled onscreen, the rather pedestrian results can't help but feel like a letdown.

Critic Consensus: This Is Where I Leave You has its moments, but given the amount of talent assembled onscreen, the rather pedestrian results can't help but feel like a letdown.

This Is Where I Leave You Photos

Will Swenson
as Younger Mort

Critic Reviews for This Is Where I Leave You

It speaks volumes about the current shortage of this type of project that so many talented people were willing to attach themselves to a picture as subpar as this one.

We get set piece after set piece, character moment after character moment, with few of them doing more than letting characters talk about themselves and tell each other things that we're not yet sure we believe.

There are a few enjoyable moments, with Fey and Fonda making you wish they had a movie of their own, but sadly the narrative is more concerned with the boys, whose relationship crises are altogether more formulaic and less interesting.

It stays in safe terrain, and the ensemble cast members often feel as if they have been selected to revisit familiar characters and performances.

Visually dull and stuffed with so many characters that none is allowed to breathe.

Shawn Levy's comedy-drama about a grieving American family is too smug and sanctimonious to take advantage of its top-notch cast.

[An] immensely underseen indie drama about four children returning home as adults when their father dies. This one is such a gem.

The cast comes together as a unit and even though the movie veers toward easy sentimentality when an edgier approach might have been more realistic, the players are the ties that bind the family and this movie together.

In the end, it seems as if the audience is eavesdropping on someone else's shrink session.

There's no new territory, but it was comfortable territory done by people I like, so I was fine with it.

See it on a Sunday matinee with your mom.

Puts too many well-known personalities against one another, thus making the film feel like a competition for who can grab either the most laughs or teary pathos.

Audience Reviews for This Is Where I Leave You

I tried twice to get through this. I thought I was being harsh turning it off the first time - but, no, after watching most with a little bit of fast forwarding to save my sanity, I still think it's crap. Dull family stuck in a house together after the death of their father, sitting shiva, though no one is really religious. Just a silly plot device to bring them together for the story. They are not even in the house the whole 7 days, they seem to go out on and off, so...? (Are they meant to be? Admittedly I don't know a lot about the Jewish religion). There's a mother with a boob job, which is meant to be funny (it's not), and a kid walking around the house pooing in a potty all the time (revolting, and I have no idea what that's about or why we need to see it). Oh, and some middle aged tedious drug use Some of the cast are good, mostly Rose Byrne and Jason Bateman, but it's very dull viewing. A lot of stereotypes, the couple who are desperate to conceive, the screw up younger brother the cheating girlfriend with the cartoonish radio dj. None of them ring true. It's watchable. But it's just ugh. Yuck.

Solid ensemble dramedy about a dysfunctional family who gathers to sit shiva for their deceased patriarch. Secrets come out, punches are thrown, but no love is lost (in both loving and hateful usages of the phrase). Lots of great characters, such as cheating wife Quinn who actually plays a sympathetic and vulnerable part, the gutsy, newly voluptuous matriarch played by dishy Jane Fonda, and the manboy next door whom eldest sister Wendy has to forgive herself for ditching years ago after their car accident left him brain-damaged.

Well meaning but ultimately vacuous, though saved somewhat by a competent cast that delivers whenever verbal sparring needs materialize.

Based on the book by Jonathan Tropper (who also wrote the screenplay), this film concerns a family's reactionary response to the death of their patriarch. The four kids and their families move back in with their mother to sit Shiva, grieve, get back their roots, and come to grips with the way their lives panned out. The greatest asset this film has lies in its great choice of casting. Fey, Bateman, Driver, and Stoll bounce off of each other like Super Balls, bantering well in every scene, and actually seeming like a real family. Everyone fights, everyone loves, and everyone has their own opinion, making for a mostly sweet natured and silly ride. What I believe remains the main problem of the film is that it's based off a sprawling novel, which ties together about twenty different storylines in only an hour and a half, while the book was some 339 pages. The film follows dozens of storylines without following many of them for more than a minute at a time. This under develops the story, the characters, and the dramedy of the film. This lends to what critics have said about this film being cliché ridden. Because the characters aren't fully developed, and not enough backstory is given, they have to be simplified down to the most basic terms, and that drains the sentimentality right out of the film. Otherwise entertaining, "This is Where I Leave You" remains classically sweet through its paper thin characters.

This Is Where I Leave You Quotes