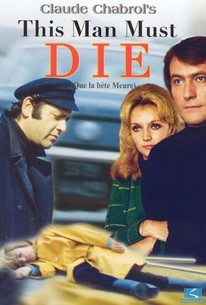 Claude Chabrol directs the tense psychological thriller Que la Bête Meure (This Man Must Die). When his young son is the victim of a hit-and-run car accident, writer Charles Thenier (Michel Duchaussoy) is determined to find the killer. Obsessed with avenging his son's death, he carefully records his thoughts in a diary. He travels to Paris and meets actress Helene Lanson (Caroline Cellier), who is a prime witness to the accident. After they start up a love affair, he discovers that the driver of the car was her brother-in-law, Paul Decourt (Jean Yanne). Paul also owns the auto repair shop that fixed up the car after the accident. Believing Paul is the killer, Charles befriends his son Phillipe Decourt (Marc Di Napoli). As it happens, Phillipe also wants Paul dead for his own reasons. Charles manages to get invited to the family's seaside home in Brittany in order to finally get his revenge, but things don't work out according to plan.

Michel Charrel
as The Thug

Robert Rondo
as The Mechanic

Georges Charrier
as The Taxi Driver
View All

This Man Must Die is as full of intelligence as a seminar and as suspenseful as a series of passes at Monte Carlo.

It is a macabre, bizarre study of the hazards of revenge, and it thrills us not with chases or cliff-hangers but with the relationship between good and evil people.

Psychological suspense movies are rare and this one is a fairly good example of the type, good enough to overlook the flaws.

After several attempts I finally managed to complete this film, I like the plot of this film very much, but it really drags in the middle of this movie, making it feel like a long watch.

For such a quiet, clam movie it packs a ver heavy emotional punch by the end and the performance by Michel Duchaussoy is nearly flawless.

Given that Nicholas Blake's "The Beast Must Die" is one of my favourite crime novels, I was looking forward to this adaptation by Claude Chabrol, though I suspected beforehand that it might be slightly disappointing. Essentially a bereaved father's diary, recording a vengeful scheme to find and punish the man who killed his son in a hit-and-run accident, the book contains a stunning surprise that only really works properly on the page. The film works best as a touching, gradually developed love story between the father (Michel Duchaussoy) and the woman (Caroline Cellier) he uses as an unwitting pawn in his game of retribution. The final scene, in which our hero finds redemption in a fatherly act of self-sacrifice for a substitute son, is absolutely lovely. Jean Yanne is terrific as the villain.