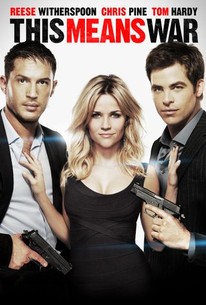 Critics Consensus: A career lowlight for all three of its likable stars, This Means War is loud, clumsily edited, and neither romantic nor funny.

Critics Consensus: A career lowlight for all three of its likable stars, This Means War is loud, clumsily edited, and neither romantic nor funny.

Critic Consensus: A career lowlight for all three of its likable stars, This Means War is loud, clumsily edited, and neither romantic nor funny.

The world's deadliest CIA operatives are inseparable partners and best friends until they fall for the same woman. Having once helped bring down entire enemy nations, they are now employing their incomparable skills and an endless array of high-tech gadgetry against their greatest nemesis ever - each other. -- (C) Fox

Til Schweiger
as Heinrich

Daren A. Herbert
as Agent Bothwick

Jakob Davies
as Boy with Glasses

Critic Reviews for This Means War

McG directs as if on autopilot, and while the action scenes are technically proficient they're so lacking in energy and momentum you kind of wonder if the adrenaline junkie wunderkind threw them in as some sort of afterthought.

A film during which very bad things happen very often, and none of them are noticeably funnier than genital trauma brought on by an air rifle.

All sorts of laugh-free and unrelaxed shenanigans.

Yet another case of Hollywood execs trying way too hard to give the audience what they think it wants.

Be forgiving, and it will probably be enough.

Only the most hardcore Witherspoon fans are likely to enjoy this film.

It feels more like the first vague sketch of a goofy film concept, than anything else. And it's the film sheer confidence in its own stupidity that impresses me.

This is a loud, obnoxious endeavor completely devoid of anything remotely coherent. About the biggest surprise in this plodding and predictable fare is the fact it manages to completely waste the talent of all three of its leads.

Some version of this may have had more personality, unpredictability and overall life to it, but the final product is so smoothed out that we can almost tap out a rhythm in time with the story developments.

Really, it's the sparks between Pine and Hardy that make This Means War worth watching, as cute as Witherspoon is.

Audience Reviews for This Means War

Another bland, boring and misfire of a romantic comedy, this film could have been terrific, but it wastes all its potential on such a lacking script that elements that normally would gel together simply don't. Instead, This Mean War is a tedious affair, a film that relies on genre clichés in order to create its plot and jokes. I must admit, I did smile a few times, but I didn't laugh one bit. This film really could have been much better, but as it is, it's a film that misses the mark. Considering that Tom Hardy was in this, I was hoping that he would this dreadful picture, but he didn't. This Means War is void of laughter, and it doesn't reinvent the genre in any way. I didn't this film to be as bad as it is, but sadly it is, and it's a film not worth seeing. I was mildly curious to watch the film because, the premise pretty good, but the execution just doesn't deliver. The film might have looked good on paper, but on celluloid it's a whole different story. This is simply a dull picture, one that doesn't succeed at making you laugh or more importantly, entertain you. This is your typical rom-com, and it's quite predictable and though it uses an interesting idea for a story, the payoff is quite weak, and most all, Hardy's skills as an actor are wasted here. However, at least his filmography is pretty solid, and with this bomb, it doesn't anything do tarnish his incredible work. Same goes for Chris Pine, who was wonderful in Star Trek, Smoking Aces and Bottle Shock. This Means War is a wasted opportunity and it really should have been a good affair, but it relies far too much on genre clichés to create its plot that it's just a flat, boring film that fails to grab your attention.

This was an enjoyable film, good to see that there are a few big budget Action/Rom-Coms being made that have a great balance of action and humour. Similar to True lies, Knight & Day and Date Night so if you liked any of those you'll enjoy this to.

A fun and cheeky film with some good comedy, but the end is a total sell out. I won't recommend it, purely because the end is so terrible. Neither male characters are desirable by the end which makes me feel this film is pointless.