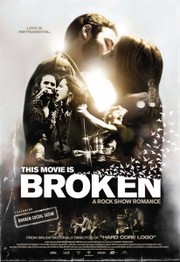 This Movie Is Broken

This Movie Is Broken Reviews

August 1, 2018
This movie is awful, mostly because it is based on such a terrible self-aborbed bunch of post-graduate wankers of a band. Yuck! The love story device just made it worse...

Super Reviewer
Daniel P
May 7, 2013
This movie made me feel broken, like I had suddenly woken up old and alone. It manages, somehow, to tell that "scuffling twenty-somethings" story in a way that feels fresh and vivid and honest, and merges this plot with a concert film. It made me long to be young and sexy and free and to lose myself in a rock show, specifically a rock show at Harbourfront Centre in Toronto, where I haven't seen a show in at least five years, somehow. And while I'm trashing my own Toronto cred, I'll say that my general indifference to Broken Social Scene (what? But they're FROM Toronto...) didn't stand in the way of enjoying the movie. I think where it succeeded with the often-precious "entry to adulthood" story was that it took a less-is-more approach, punctuating the telling moments - a sort of short-hand plot - with cuts back to the concert. And hilariously: only Canadians will understand this, but the parts in which Bruno (Greg Calderone) is using his smartphone are totally riffs on the Rogers (telecom company) commercials he's been in for the last few years. Literally, Bruce McDonald has imbued those annoying Rogers kids with souls. I did struggle with the ending - it didn't strike me as the likeliest outcome - but what's been assembled here (possibly from two half-finished, abandoned, or "broken" works...?) is another gloriously messy film from one of Canada's best directors. How messy? McDonald shot it during Toronto's ridiculous public workers' strike of 2009, when parks became dumpsites out of necessity during one of the hottest recent summers. It felt important that this was committed to film; in fact, it felt important that a lot of what Toronto is was committed to film, here. A real surprise - I wasn't ready to like this movie, but it hit me right in the gut. It could be my hometown bias or the fact that I just turned 30 talking, though...

Super Reviewer
Edward B
November 22, 2011
If this is an example of the current state of Indie filmmaking in Canada, things are worse than I thought.
Movies like Dazed and Confused, Nick and Norah's Infinite Playlist, and This is Spinal Tap celebrate music and how a specific time's culture is influenced by it. There's so much that can be done, particularly if the subject involves teens all flocking to see a band they all like. Lots of room for character development, lots of room to examine a band's impact on a group of people.
Not so in the case of Bruce McDonald's This Movie Is Broken. The film focuses on the band Broken Social Scene, a popular Indie band that hails from Toronto. The setting is 2009, amidst a garbage strike that plagued the city for weeks. Because of this strike, Broken Social Scene had to cancel a show, but decided they'd still perform for free by the Harbourfront. This is the background for a cliche love story that offers very little insight into anything about romance. Bruno wakes up next to Caroline, a one night stand that he hopes he'll be able to turn into a full out relationship, since he's had a crush on her for a long time. She leaves for France tomorrow, so he has one night to convince her to stay. Hmm, I've seen this movie countless times.
Now the problem is that the movie is too focused on showing the band's concert that it forgets about the story. The resolution happens, and you couldn't care less.
Also, a movie based on a band should suggest why this band is important enough to have their own film. I don't like Kiss, but I was able to enjoy them in Detroit Rock City. I'm not a fan of hip hop, but 8 Mile was great. Broken Social Scene, to me, is mediocre at best, but this movie does nothing to celebrate the band's impact on the Indie scene in Toronto (which is massive), or anything at all that makes you appreciate these artists.
This movie is broken all right. And it'll be too difficult to fix. Just avoid it.

Lisa J
½ August 7, 2011
I think only serious fans of Broken Social Scene will like this. It was pretty much a live concert with very little storyline.

Natasa R
July 24, 2011
i like Broken social scene , seriously. But this movie is crap full of hipster cliches .

jon f
½ May 17, 2011
I really wanted to like this movie, but instead, I ended up watching an hour and a half Urban Outfitters commercial with Broken Social Scene as the background.

Alex P
½ April 3, 2011
If Broken Social Scene wanted to put out a rockumentary, or a concert dvd they should have done just that, and not made, or helped make this. BSS is one of my favorite bands, so this is kind of hard for me to do. What I thought coming in was this was going to be a film about 2 people that revolved around them going to a BSS show, what it really is, is a BSS show that is wrapped around a short story, that ultimately fall flat. Another film that has a great trailer and an unsatisfactory final product. If we're supposed to believe the lead character Bruno is really in love with Caroline, why in God's name did he hook up with his best friend (who is a dude, is he gay? We don't know). Fail.

Nikolai E
March 13, 2011
This is a concert film, the best one I've ever seen in my admittedly limited experience of the subject, but while you're watching it it's almost impossible to tell whether the film is more interested in filming a live performance or telling a simple, genuine, naturalistic love story. The film is all about a mood, the feeling of a very specific time and place, the feeling of being in an important and meaningful moment and fighting to hold onto it and make the most of it, but the more you fight, the more it slips away. More than anything, it feels like Toronto. Our local film industry does not often distinguish itself, but the fact that we have storytellers as proficient and skillful as Bruce McDonald and Don McKellar is something for which I am eternally grateful.

Nick P
March 9, 2011
Bruce Mcdonald is one of the most daring filmmakers of our time. This film is another example...but once again like "Tracy Fragments" it just might be too much. The film does an excellent job touching on the fact that our lives play out like soundtracks...and really shows the impact that music can have in the storytelling of our love for eachother. This movie was depressing as hell...but there was a moment in the ending that was just so absolutely TERRIBLE and inappropriate for the feel of the film. It just felt....wrong and out of place that I couldn't give this film any more than 3 stars.

...and now...I'm gonna put a gun to my head and pull the trigger. Goodbye love. Goodbye world.

Sean C
March 7, 2011
This is really more of concert movie or an extended Broken Social Scene video than it is a story. I love the band, but the story didn't really have much of an effect on me.

Marco P
February 26, 2011
For someone who's seen Broken Social Scene perform live twice, it is certainly a treat to see the entire live core-- complete with guests Emily Haines, Amy Millan, and Leslie Feist-- even if it's onscreen. While the Harbourfront gig wasn't necessarily the best one they had, it was the first time in a long time that everyone in the band (including Feist, Amy Millan, and Emily Haines) participated. That to me was the first draw of this film, good tunes from a truly great band.

The second was that this movie essentially is a love letter to Toronto. Critics have been middling about the interspersing of the gig at Toronto with the story of two lost-and-found lovers who attend the same gig. This I think was the director's device of putting the city of Toronto on the spotlight along with Canada's famed export.

Essentially, Toronto and BSS are symbiotic of each other. Torquil Campbell, lead singer of the band Stars, when asked to comment on BSS' debut album Feel Good Lost, said this: "this is the first time anyone's made Toronto sound beautiful." That's how I feel about seeing the movie, it made Toronto look beautiful.

Spookie M
February 17, 2011
A collaboration between Bruce McDonald, Don McKellar and Broken Social Scene. The concert scenes are amazing and the story is pretty minimalist Overall worth watching mostly for the live footage.
Page 1 of 3