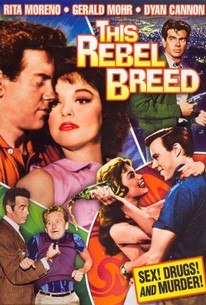 Race hatred and drug trafficking threaten to tear apart a California high school in this teen drama. Frank White (Mark Damon) and Don Walters (Doug Hume) are a pair of undercover police officers who are sent to a high school dominated by three gangs. Don, who is white, tries to infiltrate the Anglo gang the Royals, led by Buck (Richard Rust), while Frank, who is of Hispanic and African-American heritage, is to make his way into the school's black gang, the Ebonys, while also keeping his eye on a Mexican-American club, the Caballeros. Frank soon finds he's not welcomed by the Black or Mexican gangs, and when he strikes up a friendship with Lola (Rita Moreno), a pretty Mexican-American girl, he gains a fierce enemy in her brother Manuel (Richard Laurier), one of the leaders of the Caballeros. Meanwhile, Buck and the Royals have started dealing dope as a way to make money, and he's pressuring Manuel and his gang to do the same, something Manuel fiercely opposes. Manuel is also not happy about rumors that Lola is secretly dating one of the Royals, while the Ebonys have it in for Buck when they find out the secret hidden by his sexy girlfriend, Wiggles (Dyan Cannon, then still spelling her first name "Diane"). This Rebel Breed was first released in 1960; five years later, producer William Rowland added some incongruous inserts filled with nudity and re-released the film to grindhouses and drive-ins under the titles Black Rebels, Lola's Mistake, and Three Shades of Love.

Hari Rhodes
as Claude
View All

Critic Reviews for This Rebel Breed

There are no critic reviews yet for This Rebel Breed. Keep checking Rotten Tomatoes for updates!

Audience Reviews for This Rebel Breed

There are no featured audience reviews yet. Click the link below to see what others say about This Rebel Breed!