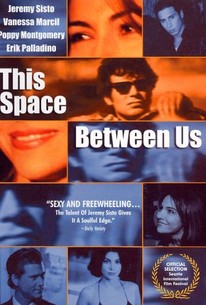 A novice filmmaker finds himself dealing with both personal and professional dilemmas when his life takes some unexpected turns in This Space Between Us. Alex (Jeremy Sisto) is a director whose first feature has received a frosty reception from the Hollywood brass, and the best job his agent can find him is directing a TV movie reuniting the cast of Punky Brewster. Alex decides it's time to give up on Los Angeles and heads to his old stomping grounds in the San Francisco Bay area, through his memories of his days there are now bittersweet following the death of his wife, Maggie (Vanessa Marcil). Alex is soon reacquainted with several of his old flames, including French artist Zoe (Clara Bellar), cheery high school pal Arden (Poppy Montgomery) and rich but flaky Paternelle (Alex Kingston). He also finds that his best buddy from school, Jesse (Erik Palladino) is still feuding with his old rival Sterling (Vincent Ventresca), who is now a city supervisor. This Space Between Us features cameo appearances from musicians David Charles Lowery (of Cracker and Camper Van Beethoven) and Brian Van Der Ark (of The Verve Pipe).

Critic Reviews for This Space Between Us

There are no critic reviews yet for This Space Between Us. Keep checking Rotten Tomatoes for updates!

Audience Reviews for This Space Between Us

There are no featured audience reviews yet. Click the link below to see what others say about This Space Between Us!

This Space Between Us Quotes