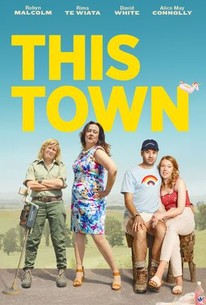 Sean and Casey are a typical budding couple in a small town in New Zealand. They met via an app, and one date has led to another, and are slowly introducing each other to their friends. There is one problem: Sean is widely presumed to have murdered his whole family. While Sean has to deal with a suspicious town, a dogged but bumbling sheriff, and an overzealous tabloid reporter, he wants nothing more than to prove his love to Casey by legally proving his innocence.

Critic Reviews for This Town

David White's breakout indie hit asks a tricky question: Could you fall in love with someone who probably isn't a murderer, but might be?

White squanders the opportunity for true satire, speeding past the many topical issues kicked up by the script - police corruption, mental health, gun crime - into a feel-good conclusion that leaves a bad taste in the mouth.

I'm going to go with the theory that everything has got a comedy in it if you approach it the right way, and This Town is nothing if not a crowdpleaser.

There are no featured reviews for This Town at this time.