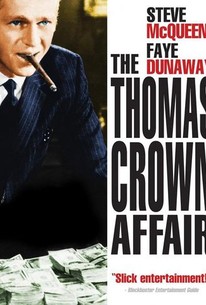 Critics Consensus: Steve McQueen settles into the role with ease and aplomb, in a film that whisks viewers to an exotic world with style and sex appeal.

Critics Consensus: Steve McQueen settles into the role with ease and aplomb, in a film that whisks viewers to an exotic world with style and sex appeal.

Critic Consensus: Steve McQueen settles into the role with ease and aplomb, in a film that whisks viewers to an exotic world with style and sex appeal.

Thomas Crown (Steve McQueen) is a self-made Boston millionaire who masterminds a bank heist in hopes of leaving it all behind. Tired of being part of the Establishment, he has hopes of pulling off the caper and flying to Rio. Erwin Weaver (Jack Weston) leads the cast of crooks who never actually meet Crown but manage to pull off the robbery without a hitch. Crown deposits 3 million in a Swiss bank account, pays off the crooks, and waits for the insurance company to repay the bank for the loss. Eddy Malone (Paul Burke) is the savvy detective who helps insurance investigator Vicky Anderson (Faye Dunaway) find the mastermind behind the heist. Thomas Crown Affair became one of the first films to employ many split-screen images throughout its running time, as devised by editor Hal Ashby. Michel Legrand's score was nominated for an Academy Award, and the song The Windmills Of Your Mind, written by Legrand with Alan and Marilyn Bergman took home the coveted Oscar.

Patty Regan
as Girl in Elevator

Jewison continues to prove himself among the most facile and appropriative of the two-dimensional directors ...

It's no doubt dated now, and the multiscreen graphics won't make any sense on a pan-and-scan video version, but this heist movie starring Steve McQueen and Faye Dunaway was considered pretty hot stuff back in 1968.

A sad product of its times.

There are a lot of good things.

Possibly the most under-plotted, underwritten, over-photographed film of the year.

...a slow-moving and mostly inaccessible drama that leans exceedingly (and egregiously) hard into its '60s aesthetic...

Something was missing. What? Acting and a story, that's what. Although a well photographed movie can do a lot, it's got to have something else going for it or you catch yourself glancing at your watch.

Hardly as good or as memorable as either of its two stars would otherwise suggest, The Thomas Crown Affair is exactly what it's title promises -- a smug escapade from the perspective of its privileged lothario.

Despite its weaknesses, it's hard to resist McQueen and Dunaway, who elevate the pulpy and somewhat thinly drawn material with their strong performances

Matthew Lucas
From the Front Row
View All Critic Reviews (36)

This movie wasn't bad, it was just way too boring, I didn't even watch it all. Some day I'll give it another chance maybe.

Nevermind the use and abuse of the so called avant-garde techniques like multiple split screen or neon lights fade out, It simply is a sensous and stylish cross between romantic melodrama and caper movie, in which the cool couple McQueen and Dunaway squeeze out their immense chemistry on the screen. The chess play/seduction scene is the best moment of the entire film.

the 1968 "thomas crown affair" is the prototypical exemplification of 60s style over substance, and it is literily the milestone for the 60s idiocyncrasic aura, regarding its chic wardrobes to paneled montage cinematography to its french new wave influenced plot twist. of course, what sells would be steve mcqueen's maschismo as well as faye dunaway's icy coolness, purely star vehicle. inevitably, it flashes also the flatulency of manhood by its conspicuous materialism, the excess of luxury. mcqueen plays an extremely self-assured millionaire who engages at bank-robbery just to prove that he could make it. and dunaway would be the persistant insurance reward-hunter who persue after him. the sexual spark sizzles as they starts to get invovled personally in a romantic way. so eventually who wins? the sexual innuendo detonates laughably in the course of playing the chess game, and the camera keeps centering upon their seperate sultry gestures, then it melts into a kaledoscopic dazzle of colors as they kiss. and the process of mcqueen's bank-robberies is presented in multiple panels silmutaneously. all the oddities are apparently self-indulgent without coherency. besides, steve mcqueen seems sorta reluctant to pose the cary-grant-esque sly debonair mannerism in numerous suits. the ending might appear abrasive with its male-centered arbitrariness. mcqueen's character decides to challenge dunaway by revealing the destination of his next robbery to test her loyalty, so it's either him or her insurance case. but in either way, she loses anyway. then she chooses to stay true to her principle by reporting mcqueen's pickup spot. jaw-droppingly, mcqueen sets her up, and there's nothing but a telegram delivered to her that says it's over. it ends with her weeping in the graveyard and him grinning on the airplane seat. it's like announcing outloud: i have great fun trifling with this intriguing woman, and i pull it off so well, and also I WON! so generally "thomas crown affair" is about a cocky man who wanna demonstrate his omnipotency, an ultimate flatulent poise of imperious manhood. mostly it clings to its brutal cynicism instead of redeeming the story with a romantic ending. it flops as steven mcqueen could never be as suave as cary grant.

The Thomas Crown Affair is a very good and smart movie from the 60's starring two greats; Steve McQueen and Faye Dunaway.