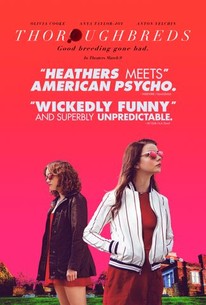 Childhood friends Lily and Amanda reconnect in suburban Connecticut after years of growing apart. Lily has turned into a polished, upper-class teenager, with a fancy boarding school on her transcript and a coveted internship on her resume; Amanda has developed a sharp wit and her own particular attitude, but all in the process of becoming a social outcast. Though they initially seem completely at odds, the pair bond over Lily's contempt for her oppressive stepfather, Mark, and as their friendship grows, they begin to bring out one another's most destructive tendencies. Their ambitions lead them to hire a local hustler, Tim, and take matters into their own hands to set their lives straight.

Sterile. Cerebral. Methodical. Those are the best words to describe Writer and Director Cory Finley's Thoroughbreds.

Cory Finley uses the clipped dialogue of film noir to heighten the sense of menace.

It's sharp. It's clever. It features a delightful final performance from Anton Yelchin...

Thank goodness, the film stays on track and Cooke's character, especially, keeps on confounding us.

Elegant, cruel and precise in its commentary on the turmoil inherent in being a teenage girl, the film works brilliantly up until the final act, its mordant, manicured savagery heightened by a primal score.

What a calling card for Cory Finley, and this could be the last outing for its leads before superstardom beckons.

Thoroughbreds is weird, funny, thought-provoking, and anchored by great performances and praiseworthy filmmaking.

Taylor-Joy and Cooke are top-notch.

It's ... incredibly bleak, but it's not nihilistic, and for me, that makes all the difference.

A minor miracle of tone control: an unsettling character study with the sick-funny kicks of a merciless thriller.

Acerbic, biting, and witty, Cory Finley's script telegraphs its intimate stage play roots with a simple story elevated by sharp dialogue, magnetic performances, and some of the smartest uses of sound in recent cinematic memory.

By taking beats from the screwball comedy and injecting them with embalming fluid and battery acid, Thoroughbreds is one of the most impressive debuts in recent years.

While not exactly funny, witty, suspenseful or engaging enough, this mediocre comedy-thriller is at least proof of first-time director Cory Finley's talent behind cameras, as he manages to make a very cinematic film from a dialogue-heavy script that was originally written for the stage.

I love going into a movie think it's going to have a certain tone and predictable fashion, only to be completely surprised by the first few minutes. Thoroughbreds marks one of the highlightiIndies of the year, at least in my opinion. Upon viewing its first trailer a while ago, the story itself intrigued me, but it's definitely a little misleading, in the best way possible. I found myself on a roller coaster ride from start to finish. Although some may find this movie slightly inconsistent in terms of where it goes throughout the third act, I truly believe that worked in its favor as a whole. Thoroughbreds is a very unique movie that takes chances in ways you don't expect, and for that alone it warrants a recommendation from me. Thoroughbreds follows two young women as they reconnect after years of slowly growing apart. Throughout the first two acts, this is a very odd and quirky piece of independent cinema that takes some weird turns. Planning some very dark things together in order to solve their issues, they meet some very strange people along the way, making for some very interesting character development and revelations. I felt quite unnerved at times and the final act of this film had me cringing, and not necessarily in a good or bad way. This movie asks quite a lot of its audience as it draws to a close, but if you're sucked into this story, then you may just find yourself going along with it. Anya Taylor Joy continues to prove that she is a star in the making. Appearing in films such as Split, The Witch, and even Morgan, audiences around the world continue to be blown away by her performances. That being said, I don't think people give Olivia Cooke the credit she deserves. Appearing in movies like Me, Earl, and the Dying Girl and the recent Ready Player One, I believe she will have her big, big break one day. These two young actresses were perfectly cast in these roles and I bought into their off-beat and strange history together. I felt a sense of sadness watching this film as well, seeing as it was the final appearance in a film by Anton Yelchin, and he really brings his all to this role. He's only in a few scenes throughout this movie, but he has some powerful moments. His character provides far more emotional weight to the film than I was expecting. The way his character meets these girls and intertwines his own life with theirs was a very interesting revelation. In terms of the way this film is filmed and edited, I would be lying if I didn't feel I was watching perfection. These filmmakers set up some very unique shots and the way certain takes linger on specific things or characters in order to provide subtle answers for the audience was terrific. Thoroughbreds isn't for everyone, especially due to the way the movie boldly concludes, but I do believe there is a niche audience out there for it. In the end, Thoroughbreds is the type of film that is right up my alley and may even make it into the discussion of my favorites movies of 2018, but I would definitely need to explain myself. I can see many viewers losing interest due to its slow pace or being turned off by the twists and turns it takes, but I truly believe the decision these characters make, made for a great film experience. If you're up for anything, then I would highly recommend checking this one out. Strange, unique, well-written, and downright cathartic.

Thoroughbreds is a dishy, tart little treat that kept me squirming, laughing, and gleefully entertained. Olivia Cooke (Me, Earl, and the Dying Girl) and Ana Taylor-Joy (Split) are outstanding as privileged teenagers trying to resuscitate their former friendship through collaborative murder. Cooke plays Amanda, a sociopath who cannot feel anything, who is incurably honest, and has stopped caring what others think. Taylor-Joy plays Lily, a self-involved young lady that feels overwhelmed by life and is skilled at dissembling. Together, the girls scheme to kill Lily's boorish stepfather and enlist the aid of a hapless small-time dealer with big plans (Anton Yelchin, in his final performance) through blackmail. The story from writer/director Cory Finley is immediately engaging with how it naturally reveals the complicated histories between Amanda and Lily as well as what makes each questionable. These are two very interesting people and just watching their probing push-and-pull was entertaining enough, especially with such strong performances. The characterization of a sociopath without a heavy moral condemnation was refreshing. We assume Amanda will be the bad influence but it really becomes the other way around, with Lily faking for her own purposes. Thoroughbreds is more dread-filled and unsettling than conventional thriller, and while there are some gallows humor to be had from the abnormal characters, this is less a dark comedy. There are drawn out tracking shots and methodical push-in camera movements meant to build audience anticipation, and they're mostly effective. The first half is a bit more engaging than what it ultimately delivers as a climax. It's still satisfying and well handled, but Finley throws in some misdirects that don't add a rising sense of stakes. The stakes are really more personal, which works since the crux is on the relationship between the girls and whether they are being honest or manipulative with one another. By the end, I thought I could argue either way who was manipulative and when. Small irony: the last scene you see of Yelchin is him as a valet parking other people's cars. Nate's Grade: B+

UNSTABLE - My Review of THOROUGHBREDS (3 1/2 Stars) Writer/director Cory Finley's debut film, THOROUGHBREDS, joins the cannon of edgy, disaffected teen murder stories, tonally lodged somewhere between THE RIVER'S EDGE and HEATHERS with a dash of Stanley Kubrick, Wes Anderson, Michael Haneke, Whit Stillman and a little HEAVENLY CREATURES thrown in there for good measure. While I can't say I enjoyed watching it, I'm glad it exists...or maybe it's the other way around. The film stars Anya Taylor-Joy (THE WITCH, SPLIT) as Lily, a rich Connecticut teen who lives with her affectless mom Karen (Kaili Vernoff) and aggressive step-father Mark (Paul Sparks of HOUSE OF CARDS). Lily bears the self-possession of someone twice her age, presenting herself with crisp clothes and an assured, off-putting stare. Enter childhood friend Amanda (Olivia Cooke from ME AND EARL AND THE DYING GIRL and READY PLAYER ONE), whom Lily agrees to tutor when they reconnect after many years apart. Amanda, more so than Lily, knowingly operates in the world as a sociopath who has learned to sometimes mask her "dead inside" qualities with a quick, phony smile. Picking up on subtle social cues, Amanda recognizes right away that Lily cannot stand her step-dad. A diabolical plot to correct the situation soon follows, challenging the viewers' need for things like empathy, feelings, and heart in the types of stories they seek. Oh, and there are horses involved, in a vaguely EQUUS kinda way, but I won't spoil that in this review. THOROUGHBREDS, originally conceived as a play, feels like one, albeit a beautifully shot one, due to its limited locations and frequency of rarely having more than two people talking in well-appointed rooms throughout its brisk running time. Much credit goes to Finley and cinematographer Lyle Vincent for providing a consistent, highly accomplished visual presentation of its somewhat off-putting story. Add the late Anton Yelchin to the mix as a Hitman/Drug Dealer the girls hire to do the dirty work, and we have the makings of a well-acted thriller. Unlike some of this film's cousins, however, most of the performances feel like variations of a deadpan style that got a little repetitive for me. Every now and then Sparks or Yelchin pop with their line deliveries, but our two leads keep things at a very chilly level. It's all very appropriate for the types of characters on display, but it's an acquired taste when it comes to any sort of fun factor. This is one dark, dry, distancing film. It's also chilling to witness the brutality Yelchin's character suffers here and in his previous film, THE GREEN ROOM, considering the gruesome details of his death, yet his considerable talents show what a world class actor he was and he'll be missed. Despite its labored tone and pacing, THOROUGHBREDS builds to something quite compelling. It's about the need for empathy and innocence in our lives, and that sometimes we savor those things even if they're faked. The film leaves its audience hanging on an ambiguous yet very poetic note, one which announces Cory Finley as a filmmaker to watch and its lead actors as ones with hidden wells of depth.