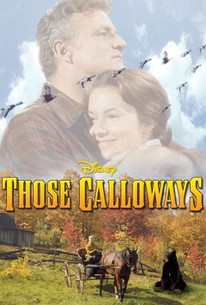 Originally trade-previewed as Those Crazy Calloways, Disney's Those Calloways is a lengthy, anecdotal film about a highly individualistic New England family. Patriarch Cam Calloway (Brian Keith) is regarded as a crank by the local villagers because of his dream to build a bird sanctuary that will protect migratory geese from hunters. Cam uses all his savings to buy a lake, where he intends to establish his sanctuary. When a wealthy sportsman offers to turn the town into a booming resort community in exchange for hunting rights, Cam opposes the plan, which briefly puts him on the outs with everyone else. Only when Cam is accidentally shot by the sportsman do the locals rally around the "crazy" Calloways so that Cam's sanctuary can come to fruition. The plot of Those Calloways can best be described as picaresque; the film is most successful in establishing mood and atmosphere, and in offering a vast array of distinctive characterizations from such pros as Brian Keith, Vera Miles, Brandon de Wilde, Walter Brennan, Ed Wynn, John Larkin, Parley Baer, John Qualen, and Paul Hartman. Look for young Linda Evans as the girl friend of the oldest Calloway boy (DeWilde) and for future Picket Fences star Tom Skerritt as the town bully. Those Calloways was based on Swiftwater, a novel by Paul Annixter.

Frank Ferguson
as Doctor
View All

Critic Reviews for Those Calloways

Audience Reviews for Those Calloways

There are no featured audience reviews yet. Click the link below to see what others say about Those Calloways!