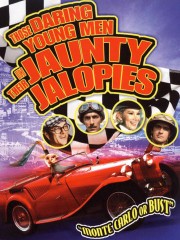 Those Daring Young Men in Their Jaunty Jalopies

Those Daring Young Men in Their Jaunty Jalopies Reviews

Take a quick ride across Europe with Those Daring Young Men in Their Jaunty Jalopies (1969). A humorous farce of a comedy. The slap stick is funny and the writing is stereotypical of European people, but it is all in good fun. The stuffy, pompous British are represented, the sleazy, cheating English, the romancing Italians, the sweet French, the goofy Americans, and the stern Germans are all here and accounted for in the movie. These cliche types do not give you anything new, but the humor is centered around these exaggerated caricatures. I think any audience will enjoy the visual jokes and clever writing.

The direction from Ken Annakin and Sam Itzkovitch is pretty excellent. Their use of wide shots show stunning European countrysides as well as giving the viewer a better understanding of the lush setting. Their utilization of mini models allows for some hilarious bits involving toy cars and mass quantities of snow. Overall, the editing is very silly in the style of the late 1960's cinema with the retro mod style, but the turn of the century look of everything is quite charming.

This brings me to the highlight of Those Daring Young Men in Their Jaunty Jalopies: the acting. This film has a massive cast of fun characters portrayed by excellent actors all around. Tony Curtis takes an unusual turn from his more serious dramatic roles as a goofy near blind American that loves joy. He is particularly funny whenever he is on screen. I wish he was present even more actually. Susan Hampshire is adorable with her sleek appearance and squeaky voice. She plays the charming British lady Betty that accompanies Curtis' chummy character Chester.

Furthermore, the supporting cast equally will delight you with their off the wall comedy chops. Terry Thomas, Eric Sykes, Peter Cook, and. Dudley Moore are hilarious as the most stuffy upper class caricatures of the British aristocracy and military men. Meanwhile, Gert Fröbe kills it as the rage filled German driver with slapstick aplenty.

Overall, this is not a ground breaking comedy. But it's epic scope, quick pace, endless jokes, and solid cast will certainly give you a chuckle.

(1969) Those Daring Young Men in Their Jaunty Jalopies
COMEDY

European rally racing across somewhere in Europe involving possibly one team from each country but are really several silly characters including Tony Curtis as Chestor who has to settle a bet with a self absorbed scrupolous Count who just inherited half a fortune from a close releative who he doesn't care about, and Dudley Moore also stars as the inventor. I liked the ending but as a comedy it wasn't all that funny.

Super Reviewer
The S
January 16, 2011
Huge motor race film with an equally huge cast of international stars. Humour can be patchy but highlights are the ever caddish Terry Thomas with his reluctant henchman Eric Sykes and the hilarious performance of Peter Cook and Dudley Moore.

Hayley S
October 25, 2010
absolute classic!! this is one of my all time favourite films.Tony Curtis, Terry Thomas,Eric Sykes, Dudley Moore...you cant get a better cast!! Would reccommend to everyone young and old!!

Charlene K
½ October 20, 2010
I watched 15 minutes of this but could watch no more. What I saw was not funny. It was extremely painful to watch.

Paul C
January 7, 2010
Surely a fore-runner or inspiration for the 'Wacky Races' cartoon series i loved as a child. It has the dastardly Terry-Thomas, the inventive Peter Cook and the dashing Tony Curtis among the many drivers hoping to win the famous rally to comic effect. Though never laugh-out loud funny - it's one of those films you look always end up watching in the holiday season.

Brian D
December 21, 2009
so much better for me than "those magnificent men" great. humor based on stereotypes works brilliantly, love terry Thomas as well as pete & dud, and the german guy, genius! wish they would release it on DVD!

Stuart K
July 31, 2009
After the success of Those Magnificent Men in Their Flying Machines (1965), director Ken Annakin decided to do a sort-off sequel, this time doing it around a car race. He assembled an all star cast, as he'd done before, and had it on just as epic a scope. It's fun while it lasts, and it's probabily one of the last of these all star comedies before they went out of fashion. Set during an international car rally in Europe, where the contestants start from various points, (John O'Groats, Sweden, Portugal, Sicily and Athens), it's an ensemble piece which follows the different kinds of drivers that take part. From posh rotter Sir Cuthbert Ware-Armitage (Terry-Thomas) and Percy Perkins (Eric Sykes), the co-driver he's blackmailing. American mechanic Chester Schofield (Tony Curtis) and the posh girl Betty (Susan Hampshire). There's also military inventors Major Digby Dawlish (Peter Cook) and Lt. Kit Barrington (Dudley Moore) racing through Sweden and Denmark against jewel smuggler Willi Schickel (Gert FrĂ¶be). It's a live action very of the Wacky Races essentially, but it's good silly family fun, the kind of film they just don't make anymore. It's well made, (although there is alot of rear-projection), and the romantic subplot is half-baked. But, it holds hope. It was released in America under the title of Those Daring Young Men in Their Jaunty Jalopies

Caitlin F
½ June 22, 2009
Very funny movie. The only problem is, is that it's really all over the place. The constant moving back and forth between characters can be confusing. Nonetheless, it's still very good. Pete and Dud had the neatest car...

Jimbo S
½ December 2, 2008
A typical example of a series of similar silly films of the time (Those Magnificent Men..., The Great Race) that lacked great humour but are still interesting relics of filmmaking.

Tara M J
½ July 22, 2008
This film is just as hilarious as it was when I 1st saw it (when I was about 8). All the cast & brlliant with their on-point witty lines & slapstick
mentality. The real jewels in the crown tho hav 2b Peter Cooke & Dudley Moore, along with Susan Hampshire & Tony Curtis. Considering its running time its moves faster than the casts' automobiles (which means we're in luck!) Its gr8 for all the family & hasn't dated at all. It truly is all on its own.

James H
½ March 20, 2008
This is so stereotypical is it absolutely hilarious- stupid frenchmen, women-obsessed Italians, stiff-upper-lip-army-officer Brits, dastardly & conieving Germans.
Plus the pranks and tricks like swapping shoes around, or putting on a policemans hat so the law will let you stright past- it's all very ridiculous really but funny nevertheless.