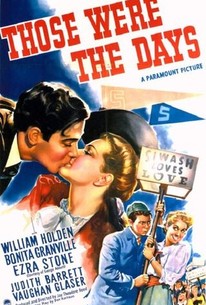 William Holden and Bonita Granville, heavily if not convincingly decked out in "old age" makeup, recall on their 35th wedding anniversary how they first met in 1904. Holden was a brash college freshman, while Bonita was the daughter of a local judge (Vaughn Glaser). Since Holden couldn't stay out of trouble, the judge prohibited him from visiting his daughter, but the boy opposed the edict and ended up being arrested--with Bonita managing to have herself thrown in jail as well. The anecdotal storyline comes to a comically ironic conclusion when the ageing Holden complains that he can't control his own headstrong son. Based on the "Siwash" stories by George Fitch, Those Were the Days gets by on its nostalgic appeal, but cannot be considered one of William Holden's more significant pictures.

Critic Reviews for Those Were the Days

There are no critic reviews yet for Those Were the Days. Keep checking Rotten Tomatoes for updates!

There are no featured reviews for Those Were the Days at this time.

Those Were the Days Quotes