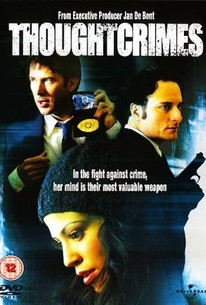 On the night of her prom in 1994, teenager Freya McAllister (Navi Rawat) suddenly begins hearing strange voices. As a result, Freya is diagnosed as schizophrenic and squirreled away in a mental hospital, where she remains for the next eight years. Along comes psychologist Michal Welles (Peter Horton), who while treating Freya calmly informs her that she is not insane, but instead telepathic: the voices she'd heard were the thoughts of the people around her. What Dr. Welles doesn't tell Freya--at least not at first--is that he is in the employ of the National Security Agency, which hopes to use Freya's special talents to hunt down potential terrorists! Something of a cerebral La Femme Nikita, Thoughtcrimes may have been intended as the pilot for a television series, but was released on home video before making its USA network TV bow on October 15, 2004.

There are no critic reviews yet for Thoughtcrimes. Keep checking Rotten Tomatoes for updates!

There are no featured audience reviews yet. Click the link below to see what others say about Thoughtcrimes!