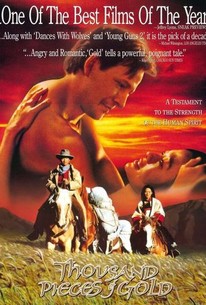 Produced on a shoestring $2 million budget, documentary director Nancy Kelly and her husband, editor Kenji Yamamoto created this romantic western based on a true story. Rosalind Chao stars as Lalu Nathoy, a young woman sold into marriage by her impoverished father in late 19th century China. Lalu is transported to the U.S. by a slave trader, Jim (Dennis Dun), on whom she develops a crush. Although conflicted, Jim fulfills his professional obligation to deliver Lalu to Hong King (Michael Paul Chan), a saloon owner in a rough Idaho mining town. Refusing to participate in Hong King's plan to make her into an exotic prostitute, Lalu keeps her dignity about her and wins the adoration of Charlie (Chris Cooper), Hong King's white, alcoholic partner. Despite the prejudice of the locals, Lalu becomes a cleaning woman and a successful laundress. Though she dreams of marriage to Jim or escape to China, she recognizes Charlie's admirable qualities after a violent incident that casts him in a different light.

Will Oldham
as Miles

George Cheung
as Lung On

Danny Wong
as Buyer
View All

The debut feature by San Francisco-based documentary maker Nancy Kelly, Thousand Pieces is also a thoughtful study of bigotry, the immigrant experience, and how everyone harbors a personal American dream.

Rosalind Chao's performance is a wonder -- the sort that, in a conventional Hollywood epic, would inspire Oscar speculation.

The ugliness of racism and misogyny roil within nearly every scene.

One look at the determination in Chao's eyes and the message is clear: Lalu saves herself.

One of those amazing pockets of Americana that too infrequently see the light of movies. Aside from its obvious interest as a cross-cultural tale, the film does remarkabIy well as a portrait of western life.

Not a great dramatic film.

Thousand Pieces of Gold remains both a worthwhile exploration of individuality and agency as well as a beguiling love story.

As Lalu, Rosalind Chao brings an emotional intensity to the role, while the always superb Chris Cooper complements Chao with a calm, thoughtful presence.

An East-meets-West Western with an easy familiarity about it, with just enough surprising twists included to keep it interesting.

Kelly's film takes a harder yet more romantic look at men, women and gold in the Old West.

There are no featured audience reviews yet. Click the link below to see what others say about Thousand Pieces of Gold!