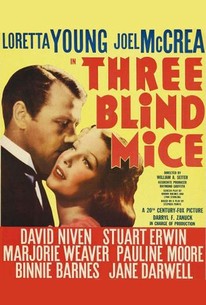 Whenever things got slow at 20th Century-Fox, the studio revved up its old reliable "three girls looking for millionaires" plotline. Three Kansas sisters (Loretta Young, Marjorie Weaver and Pauline Moore) use a small inheritance to set themselves up in a Manhattan penthouse. Figuring that Young has the best chance of snaring a rich husband, she is allowed to pose as a wealthy heiress, while Weaver and Moore pose as her servants. Young wins Joel McCrea, who isn't as rich as everyone thinks. Weaver ends up with a rancher (David Niven) who likewise is cash poor. But Moore hits the jackpot with a slow-witted working stiff (Stu Erwin) who turns out to be the only millionaire in the bunch. Three Blind Mice was remade (with much of the dialogue intact) as the 1941 musical Moon Over Miami, then re-remade in period costume as Three Little Girls in Blue (47). In 1953, elements of Three Blind Mice were combined with the basic plotline of the 1932 comedy The Greeks Had a Word for Them--and the result was How to Marry a Millionaire. ~ Hal Erickson, Rovi

Three Blind Mice won't weigh you down with its problems. But who wants to be weighed down in hot weather?

There are no featured reviews for Three Blind Mice at this time.