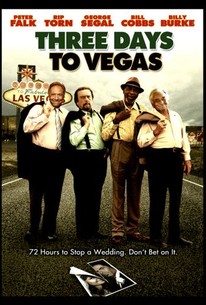 Peter Falk, Rip Torn, Bill Cobbs, George Segal, and Coolio star in director Charlie Picerni's geriatric road comedy following an adventurous group of four senior citizens as they set out to prevent the daughter of one from marrying the wrong guy. Gus Fitzgerald (Falk)'s daughter is about to tie the knot in Las Vegas; trouble is, she's tying it to a guy who isn't worth the price of your average buffet meal. But regardless of the fact that Gus may be retired and living the life in Florida, by no means is he averse to a little adventure. Now, after rounding up golfing buddies Joe Wallace (Torn), Marvin Jeffries (Cobbs), and Dominic Spinuzzi (Segal), Gus rents "The Ultimate Party Bus" and plots his path to Las Vegas. Along the way, Gus and his crew will dance the night away at a Miami Beach salsa club, give a ride to a rap superstar who goes by the name The Flo (Coolio), and eventually land free rooms at the lavish Rio All-Suite Hotel and Casino - located directly in the luminous heart of Sin City. As the hour of the wedding draws near, Gus and his pals attempt to stay out of trouble long enough to break up the ceremony and rescue his daughter from a life of certain unhappiness.

This high jinx comedy is like a party balloon

There are no featured audience reviews yet. Click the link below to see what others say about Three Days to Vegas!