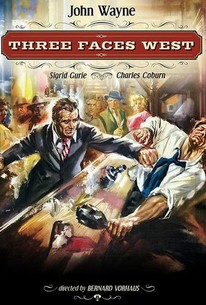 The Refugee was the original release title for the offbeat John Wayne vehicle Three Faces West. Wayne, Sigrid Gurie and Charles Coburn are starred as John Philips, Leni Braun and Leni's father Dr. Braun, who like so many other victims of the Depression are forced to move bag and baggage from the Dust Bowl to the West Coast. A fugitive from fascist oppression in Austria, Dr. Braun hopes to carve out a new existence for himself and his daughter Leni by tilling the soil, but she is more interested in being reunited with her Austrian boyfriend Eric von Scherer (Varno) once she arrives in Oregon. In charge of the migration westward is John Phillips who loves Leni but keeps his feelings to himself. But when Leni discovers that her sweetheart has thoroughly embraced the Nazi cause, she finds solace in the arms of the faithful Phillips. Among the screenwriters of The Refugee was Samuel Ornitz, later one of the blacklisted Hollywood Ten.

Dewey Robinson
as Bartender
View All

This mediocre John Wayne vehicle is a message film about refugees escaping Nazi-dominated Austria; the original title (I Married a Nazi) was changed for political reasons.

An unusual contemporary Western featuring a compelling theme about refugees making a go of it in their new country among pioneers.

There are no featured audience reviews yet. Click the link below to see what others say about Three Faces West!