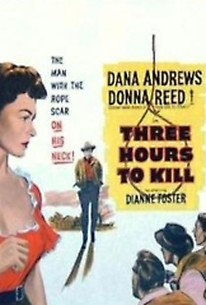 Three Hours to Kill is a "message" Western that manages to entertain without preaching. Jim Guthrie (Dana Andrews), unjustly accused of murder, is forced out of town by an angry mob. After several tough years living off the land, Guthrie returns to clear his name. Fearing that Guthrie is out for blood, the townsfolk arrange a "necktie party." The one person who might show some compassion is ex-fiancée Laurie Mastin (Donna Reed), who'd been left pregnant by Guthrie and had married another man on the rebound. But Laurie's brother was the murder victim, so she's just as determined to rid the world of Guthrie as everyone else. With the help of sympathetic Chris Plumber (Dianne Foster), Guthrie traps the real murderer. The mentality of mob rule is exposed for all its ugliness in Three Hours to Kill, ironic in that real-life Hollywood had been governed by mob pressure to enforce the Blacklist during the same period. ~ Hal Erickson, Rovi

Robert A. Paquin
as Storekeeper

Syd Saylor
as Townsman
View All

There are no critic reviews yet for Three Hours to Kill. Keep checking Rotten Tomatoes for updates!

There are no featured audience reviews yet. Click the link below to see what others say about Three Hours to Kill!