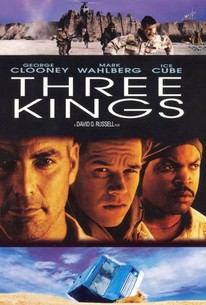 The Gulf War is over, and three soldiers want to go home rich. Major Archie Gates retires in two weeks. Sergeant Troy Barlow is a new father. Chief Elgin is on a four-month paid vacation from Detroit. Saddam Hussein stole a great deal of gold from Kuwait, and these soldiers have no problem with stealing it from him. But on their way to collect their booty, they bear witness to the the disturbing results of the war effort. President Bush has encouraged Iraqi citizens to fight back against Saddam and pledged to support them, but when they rise up, they get NO American support, and they're getting slaughtered. As the soldiers realize the true situation in Iraq, they're confronted with their own humanity, and they're forced to rethink who they are and what they're doing.

Ali Alkind
as Deserter No. 1

Christopher B. Duncan
as Camp Soldier

[Russell] not only has designed an action-adventure laced with incendiary humor but a movie that wants to explore race, politics, war, the media and U.S. diplomacy in the Middle East. In large measure, he pulls it off with breathtaking aplomb.

It's amazing how much action can be crammed into a movie about a war where most soldiers didn't actually see any action. Three Kings has its fair share of shootouts, none that are merely squeezed in for guilty pleasures. Every shot fired is motivated by c

A damning yet idealistic satire about the motives behind U.S. foreign policy.

The last reel descends into a muddle of trade-offs, heroic about-turns and romanticised rebels, but this is defiant, provocative cinema; Russell may yet prove a film-maker to treasure.

No, Three Kings is not a great picture, but it is a very good one, perhaps the first feature of merit to come out of the Gulf War.

What lingers in the mind far longer than the smart dialogue, the slightly cartoon characterisations or the neat feel-good ending is a vivid sense of the sickening nature of modern warfare.

One of Hollywood's few films about the Gulf War, David O. Russell's Three Kings is an original war feature that's effective as a social satire as well as political critique.

Ithis is a career making movie, then its writer/director David O. Russell who deserves the credit with this very creative effort from the debut filmmaker.

Three Kings mightn't be the best thought-out or most reassuring movie of the year, but the more I think about it, the more I'm sure that it is one of the best.

Far more intelligent and perceptive than most actioners, yet with enough thrills and spills to satisfy adrenaline junkies.

(The) screenplay abruptly changes tone after the first half-hour, eventually incorporating some genuinely harrowing sequences... The final picture becomes something noticeably deeper and smarter than its first reels suggest.

This is quite simply the best anti-war movie since Catch 22. Wild, whacko, irreverent, chaotic, you are never sure what will happen next or where your loyalties lie. The innate utter stupidity of war is beautifully exposed, as are the often all too ordinary motivations of those who participate in it - lust for adventure, fame, promotion, wealth, but also sudden compassion, honesty and reflection. A roller coaster ride of action and thrills with sudden counterpoints of instant horror that make you think and ashamed of yourself for laughing out loud just a moment before. If this doesn't shake some holy beliefs in the truth of what we are told, and the justification for what we are doing, nothing will. Highly recommended! 4 Stars 4-2-14

A great war film with flawed, unheroic characters. Captures the mercenary spirit of (some) soldiers which undoubtedly exists but is rarely portrayed in war films. There is a beautiful sense of isolation and desperation depicted in this gritty film.

I thought I had previously rated and reviewed this, but I guess not. Directed by David O. Russell, this is a movie based on a true story about three American servicemen during the Gulf War who hatch a plan to make off with a stash of Kuwaiti gold stolen by Saddam Hussein. The three initially decide to make off with the fortune, but the closer they get to finding it, the more they realize the truth and consequences about the role of the U.S. in the part of the world, and the realities of American foreign policy. These revelations have profound impacts on the men, forcing them all to make some tough choices and evaluations. While the set up alone is great, what makes the movie really shine is how ambitious it is in terms of genre classification. It's humorous (at times), quite serious and dramatic at others, and in general a really scathing socio/political satire. Oh eyah, it's also a war film, too. It's a mix that doesn't always work, but manages to in this case, thanks in no small part to the skill of the director. It's not all on him, though. The script is quite great, and very intelligent, the casting is top notch, with the three leads of George Clooney, Mark Wahlberg, and Ice Cube all delivering very fine work, providing nicely rounded and developed characters. Yes, even Ice Cube (for those who doubt he actually does having acting skills). The action scenes are well done, and don't upstage the meat of the picture, the camerawork and editing are pretty good, and the fact that the film finds a nice balance between entertaining and enlightening is remarkable. Definitely give this one a shot, it's terrific.