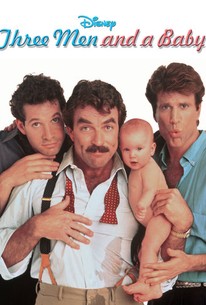 Critics Consensus: The American remake of the popular French comedy mostly works a charm under the combined talents of the three leads, who play nicely against type -- although forced plot elements and sentimentality at times dampen the fun.

Critics Consensus: The American remake of the popular French comedy mostly works a charm under the combined talents of the three leads, who play nicely against type -- although forced plot elements and sentimentality at times dampen the fun.

Critic Consensus: The American remake of the popular French comedy mostly works a charm under the combined talents of the three leads, who play nicely against type -- although forced plot elements and sentimentality at times dampen the fun.

Three Men and a Baby is an Americanized remake of the 1985 French comedy hit Three Men and a Cradle. Tom Selleck, Ted Danson and Steve Guttenberg play three upwardly mobile New York bachelors who share an apartment. Their even-keel lifestyle is thrown out of whack when a young woman leaves a baby on their doorstep, suspecting that film director Danson is the father. The balance of the film is devoted to milking as much humor as possible out of the situation of three urbane young men trying to play nursemaid with nary a clue of what they're doing (at one point, a desperate Selleck offers Guttenberg a thousand dollars if Guttenberg will change a diaper). A subplot involving drug dealers is thrown in to sustain audience interest after our trio of heroes become accustomed to a baby around the apartment. "Urban legend" aficionados please note: That cardboard cutout of Ted Danson briefly glimpsed in one scene of Three Men and a Baby is not the ghost of a little boy who died in the bachelors' apartment before filming started.

Eugene Clark
as Man #1 at Party

Christine Kossak
as One of Jack's Girls

Joe Lynn
as Detective #2
View All

Now Streaming: Joe, The Muppet Movie, and More
The Ghost Stays in the Picture
Jet Li Named in "Fearless" Lawsuit

Three Men and a Baby is a lot of fun, and more progressive than you might expect.

The film works well despite its predictability, perhaps because of it.

It has the likability of the first movie. The people who made it have carried over much of the original's weightless, sweet-tempered flavor.

As a sometime actor, Nimoy understands how to get good performances from the members of his cast.

It would be a better movie if everyone involved had concentrated on making the behavior of the three heroes more believable.

...a conventional yet mostly entertaining comedy...

For a better time, however, rent Serreau`s original film at the video store.

The leads acquit themselves fairly well, but the biggest winner is Selleck, whose low-key charm and gift for light comedy are put to good use here.

Coasts on the charisma of its three stars.

Some forced elements to give a action form to the remake together with an unnecessary silliness, Leonard Nimoy's comedy have a likable stars, sweet and interesting scenes.

A silly movie, a little stupid at times, but it's got a good cast and it's pretty funny most of the time too. Overall, it's okay.

A warm gentle comedy about three bachelors trying to raise a baby - a situation that naturally promises a lot of funny scenarios. A timeless classic.

That is not a ghost.