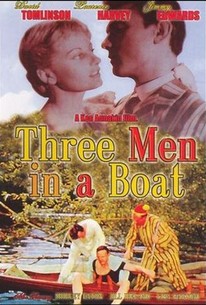 Three Men in a Boat is the second film version of the comic novel by Jerome K. Jerome. The titular trio is played by popular British comedian Jimmy Edwards, up-and-coming leading man Laurence Harvey and stalwart character actor David Tomlinson. Escaping their dull weekday pursuit, the three pals take a pleasure excursion down the Thames in a small boat, encountering all sorts of comic and romantic complications. Jill Ireland makes an early screen appearance as a young lady who briefly bewitches the bookish Harvey. Though dated, Three Men in a Boat was just as capable of eliciting laughter as it had been in its first cinematic incarnation in 1933.

Stuart Saunders
as Dad at Regatta

Rhett Ward
as Man in Dinghy

Sheila Raynor
as Women at Picnic

Julia Nelson
as Mother with Baby

Leslie Weston
as Baker
View All

Critic Reviews for Three Men in a Boat

There are no critic reviews yet for Three Men in a Boat. Keep checking Rotten Tomatoes for updates!

There are no featured reviews for Three Men in a Boat at this time.

Three Men in a Boat Quotes