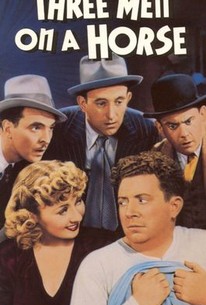 Three Men on a Horse Photos

All but forgotten today, the George Abbott-John Cecil Holm stage comedy Three Men on a Horse was once a staple of the community theatre and summer-stock circuit (a 1958 TV production starred no less than Johnny Carson). Though a faithful adaptation of the Broadway original, this 1936 film version avoids staginess thanks to the sprightly direction of Mervin LeRoy. Frank McHugh plays a meek, henpecked greeting-card writer who has an uncanny knack for picking winning race horses. Wandering into a bar after a spat with his wife (Carol Hughes), the prognosticative McHugh is "adopted" by Runyonesque horseplayers Sam Levene, Allen Jenkins and Teddy Hart. Held a virtual prisoner by the three gamblers, McHugh is unable to return to his job at the greeting card company, forcing his boss Guy Kibbee to realize for the first time the indispensability of his missing employee. A very slight piece, Three Men on a Horse is buoyed by the talents of the above-mentioned actors, as well as such reliables as Joan Blondell, Edgar Kennedy and Eddie "Rochester" Anderson.

Harry Hayden
as Man on Bus

Critic Reviews for Three Men on a Horse

Audience Reviews for Three Men on a Horse

There are no featured audience reviews yet. Click the link below to see what others say about Three Men on a Horse!

Three Men on a Horse Quotes