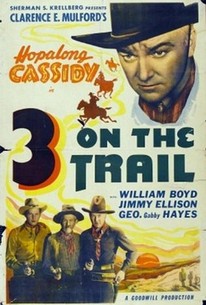 Three on the Trail Photos

Three on the Trail was the fifth entry in the long-running "Hopalong Cassidy" series. Western fans need hardly be reminded that during the 1935-36 season, the titular threesome were played by William Boyd (Hopalong Cassidy), Jimmy Ellison (Johnny Nelson) and George "Gabby" Hayes (usually cast as "Windy," but here playing a character named Shanghai). Our heroes are determined to track down a gang of cattle rustlers who've branched out into stagecoach holdups and murder. The villains try to pin the blame on Hoppy and Johnny, but the real culprits are in cahoots with corrupt sheriff Pecos Kane (Onslow Stevens). Muriel Evans plays Mary Stevens, whose presence foments a romantic rivalry between Hoppy and Johnny; in later series entries, Cassidy would steer clear of women, permitting his younger sidekicks to handle the "love stuff."

Franklyn Farnum
as Deputy
View All

Critic Reviews for Three on the Trail

Only for those with a yen for these Old-fashioned Westerns.

There are no featured reviews for Three on the Trail at this time.

Three on the Trail Quotes