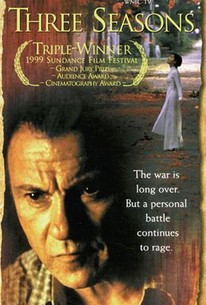 With sweeping directorial vision and a powerful poetic narrative, Tony Bui has created an enormously impressive feature debut about the "new" Vietnam. Weaving three stories (really four) into a striking pictorial tapestry, Three Seasons contrasts the traditional to the modern in a nation in the chaotic throes of transition. We meet four ordinary people living almost as strangers in their own land: a young girl hired to aid a reclusive spiritual master; a cyclo driver who becomes obsessed with a proud and ambitious prostitute; a very young boy hustling lighters, gum, and cheap watches from the case around his neck; and an American Vietnam vet searching for the daughter he has never seen. What ensues is images of lives struggling to find both place and meaning in a nation which won the war but may now be losing a piece of its soul. The rich diversity of American independent film is deepened this year by the Southeast Asian, melodramatic style of Bui's work. The usual hyperbole about craft and art can't describe the immense visual sensibility of this film. It's not an overstatement to say that more arresting lyrical beauty may not appear in another American film this year. As the first American film to be shot in Vietnam since the war, with a remarkable Vietnamese cast and emotionally provocative acting by the stalwart Harvey Keitel, Three Seasons achieves a pinnacle of excellence that is rare in filmmaking today.

Nguyen Ngoc Hiep
as Kien An

Luong Doc Hung
as Man Who Chases Lan No. 1

Tran Duy Long
as Man Who Chases Lan No. 2

Huynh Kim Hong
as Woman on the Balcony

A. Lu
as Street Guardian No. 1

To my eyes, the novelty and exoticism of the setting couldn't disguise the hackneyed situations and sentimentalized characters.

The result may not reflect the Vietnam of reality, but it's as close to life as most romantic melodramas, which is probably the point.

Stronger in visual imagery than in ideas or characters, Bui's impressive feature debut, which is set in Vietnam, won the Sundance Film Festival jury and audience awards.

A light and lovely movie that satisfies, but goes away quickly.

An extraordinary cross-cultural masterpiece shining with incredible images, a keen sense of place, and a reverence for the incredible yearning of ordinary people.

Bui has no sense of pacing or momentum.

A fascinating look at life in modern-day Vietnam.

There are no featured audience reviews yet. Click the link below to see what others say about Three Seasons!