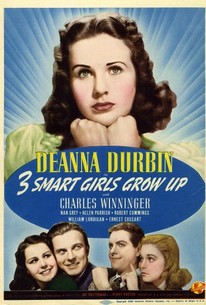 In this sequel to 1936's Three Smart Girls, Deanna Durbin is back as the most precocious of a sister trio: the other girls are Nan Grey and Helen Parrish (replacing the first film's Barbara Read. Three Smart Girls dealt with the girls' efforts to reunite their parents. In the sequel, Durbin pokes her turned-up nose into the affairs of her older sisters, hoping to find suitable husbands for them. The musical highlight is Durbin's rendition of the old wedding-day standard "Because," which resulted in a bestselling record. In 1939, Deanna Durbin could have appeared in a film version of a seed catalogue and still make scads of money for Universal Studios.

Three Smart Girls Grow Up is another spike in the Durbin legend.

There is no doubt any longer of Miss Durbin's immense talents as an actress ; any undertones that there are in this amusing, astute and sentimental tale are supplied by her.

There are no featured audience reviews yet. Click the link below to see what others say about Three Smart Girls Grow Up!