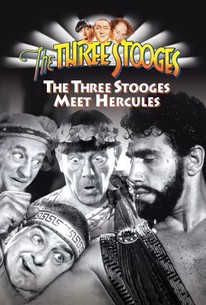 Larry, Moe and Curly Joe work in a pharmacy where a young professor works on a time machine. When the machine is sabotaged by foil Ralph Dimsal (George N. Neise), the Three Stooges, the professor and beautiful Diane (Vicki Trickett) are transported back in time to ancient Greece. The group lands in the middle of a fierce battle between rival armies. Meeting up with the might Hercules, they soon discover their appearance in the battle helped turn the tide in favor of the wrong side. A series of mishaps and a stint as galley slaves plague their efforts to correct historical accuracy. They battle mythological monsters and the evil General Odius (Neise) to set the historical record straight.

There are no featured audience reviews yet. Click the link below to see what others say about The Three Stooges Meet Hercules!