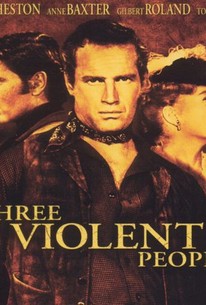 Set in the American West after the Civil War, this drama is the pull-no-punches story of a lethal family feud. Colt Saunders (Charlton Heston) fought for the Confederacy in the war, and he returns to his family's Texas cattle ranch after impulsively marrying Lorna Hunter (Anne Baxter) following a very short courtship. During the war, Mexican foreman Innocencio (Gilbert Roland) and his sons have run the ranch. Colt's one-armed brother, Cinch (Tom Tryon), who hasn't been much of a help, wants Colt to give him money for his part of the land. When Colt refuses to give him gold in exchange for his share of the inheritance, Cinch launches a scheme to sell the place to a wealthy Northerner. Colt chafes at the notion of selling to a former enemy. Lorna gets pregnant with their first child, and Colt then discovers that she once worked as a prostitute. Soon after, a plot to kill Colt is unleashed.

Kenneth MacDonald
as Croupier
View All

There are no featured reviews for Three Violent People at this time.