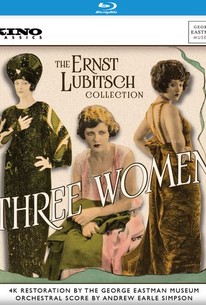 A mother and daughter are victimized by a fortune-hunting heavy in this drama directed by Ersnt Lubitsch. George Lamont (Lew Cody) tries to woo the wealthy widow Mabel Wilton (Pauline Frederick) to be near her three-million-dollar fortune. When he discovers her daughter Jeanne (May McAvoy), George puts the daughter in a compromising position that forces her marriage to avoid a scandal. The groom soon proves his infidelity by making time with the vamp Harriet (Marie Prevost). Mabel exacts revenge and defends her daughter by shooting the villainous son-in-law in this drama co-starring Willard Louis, Pierre Gendron, Mary Carr, and Raymond McKee.

May McAvoy
as Jeanne Wilton

Mary Carr
as His mother

The unseen hand of Ernest Lubitsch pulls the strings for these popular puppets and makes them dance acceptably.

Three Women is an exposition of as pretty a piece of direction as has been seen on the screen in some time. For this Ernst Lubitsch is to be credited.

While Three Women has many strong points, it becomes wobbly and unreal toward the end.

In spite of an unexpectedly weak ending, the film has many points of interest, and an unusual story has been treated by the producer with great subtlety. Herr Lubitsch trusts a little in the intelligence of his audience.

As the self-interested roué's plan kicks into high gear, the cynical comedy darkens to operatic drawing-room melodrama, but Lubitsch anchors the resulting violence with a piercing, subtle intimacy.

Performance-wise, only Frederick manages a real and interesting turn here. She's fascinating to watch, and knows exactly how to play to the camera. Everyone else either overacts, mugs, or becomes part of the scenery.

A hit then, it's minor Lubitsch now, but still worth a look, with a very good original orchestral score by Andrew Earle Simpson.

Somehow it is still an easy watch even if Lubitsch can't do all of his magic with such an inferior high society melodrama.

Three Women is one of the pictures that I am anxious to see again.

There are no featured reviews for Three Women at this time.