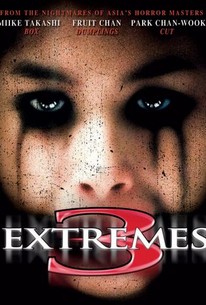 Three Asian directors, from Hong Kong, Korea, and Japan, join forces to create an omnibus horror film, Three...Extremes. In Fruit Chan's "Dumplings," shot by Christopher Doyle, Mrs. Li (Miriam Yeung), a thirtysomething former actress with a philandering husband (Tony Leung) goes to visit Aunt Mei (Bai Ling), who sells the most expensive dumplings in Hong Kong. Mrs. Li knows about their rejuvenating powers, and she also knows about their unpleasant main ingredient, but after some initial nausea, she digs right in. In Oldboy writer/director Park Chan-wook's "Cut," a successful filmmaker (Lee Byung-hun of Joint Security Area) arrives home to find that a disgruntled extra (Lim Won-hee) has taken over his home, and fastened his pianist wife (Kang Hye-jun of Oldboy) to the grand piano. The madman threatens to cut off the wife's fingers, one by one, unless the director strangles the helpless child he's tied to the couch. Takashi Miike directs the last segment, "Box," about a young author and former circus performer, Kyoko (Kyoko Hasegawa), seemingly haunted by the ghost of her twin sister, who died a mysterious and horrible death while practicing their act. Adding to Kyoko's trauma, her editor (Atsuro Watabe) is a dead ringer for her old stepfather/ringmaster, who may have perished in the same "accident" that took her sister's life. Three...Extremes was shown at Subway Cinema's New York Asian Film Festival in 2005. For the American release of Three...Extremes, the order in which the films are presented was altered from the original "Box," "Dumplings," and "Cut" to "Dumplings," "Cut," and "Box." This film was actually preceded by another omnibus film, Three, that was nevertheless retitled Three...Extremes II for the English-language market and issued after this one. ~ Josh Ralske, Rovi

Yuu Suzuki
as Shoko
View All

You can't believe what they're doing here.

An instantly memorable, at times squirm-inducing, assemblage as likely to take your breath away as it is to trigger the gag reflex.

Asian horror like the new Three ... Extremes beats an American film like Saw II at its own game.

A strong effort from everyone involved, though they're not all wholly successful.

It's just three gifted filmmakers with vision to spare, daring you to go to their extremes.

All the episodes are interesting and disturbing - perhaps too much so, without any clear reason for the audience to endure the suffering.

This anthology is a mixed bag.

A great horror anthology that thankfully restores my faith in the anthology gimmick that Hollywood completely diminished years ago...

These films give you a rush that most American horror movies don't, even if you're not entirely certain what's going on.

Watched "Three... Extremes" last night, and it was insanely good, but This is the grossest three Asian Horror Films I have ever seen in my life. All three stories I thought were very thought provoking, and again a little frustrating. Here's a short review... Box-Takashi Miike (Japanese Language) This is a nightmarish tale of a woman's horrifying dreams becoming reality, but then again, maybe not. That's the difficulty with this story, there is so much surrealism, that it's hard to tell. I liked the story, some of which was very frightening. The ending however is completely totally bizarre, and it totally left me clueless as to what Miike intended for the viewer to take away from this, if anything. This is the weakest of the three stories, but still very interesting and definitely requires multiple viewings. Dumplings-Fruit Chan (Chinese Language) This little story is my favorite of the bunch and also very very disturbing and pretty gruesome. Not because of gore or anything like that, but because of the subject matter. It's no secret or spoiler that this movie is about vanity and a women's need to enhance her physical appearance to try and win her husband back from his whoring around. It concerns as most of you know, the grisly meat a former lady abortionist uses to treat her rich clients vanity needs. This movie made me squirm on more than one occasion as the woman chomps down on the dumplings with a wicked crunching sound of tiny bones. This story has a lot of humor but it is very dark and totally black humor. Some may call it totally sick humor, and all would apply in my opinion. The ending is very confusing for me, especially one particular scene and I hope somebody explains it to me. I'm not talking about the grand finale, where the leading lady commits the ultimate gross-out, but the scene with all the blood where some guy has been attacked by a women. This appears to happen at the apartment of Aunt Mei, and then it shows her packing up and leaving. What was that all about? Who was the woman covered in blood, and the guy that was attacked? Anyway, the grand finale as Ching looks directly into the camera and commits what must be THE ultimate sin is flat out creepy as hell. Excellent short story, and now I'm thinking whether I need to see the extended version. Cut-Chan-wook Park (Korean Language) Now this is one gruesome story, which revolves around a movie director (Lee) and a former extra of his that's gone completely insane and terrorizes the director and his wife at their home. Park's short story touches on adultery, relationships, regret, fame and childhood memories - as well as featuring amputation, torture, child abuse, and a crazy set - as Lee and his kidnapper spar until the shocking (but not altogether satisfying) end. In fact, the ending is the only bad part about this otherwise intriguing story. This is the most graphic of the three stories, and the most brutal. But the twists and turns that happen towards the end, tend to confuse the whole story. Nevertheless, this is a great little horror movie, and now I'm very hyped to watching my new DVD of Park's "Oldboy". Summary This is one of the most entertaining dvds in the horror genre to come out of Asian for a long time. With three short movies totally over two hours, it makes a great evening of demented entertainment by three exotic filmmakers. The second disc which contains a text portion which explains the plot of each story, and then a "Making Of" extra for all three stories is very good. It's always interesting to see how these directors work and the interviews with the actors is excellent. The other thing I found interesting with this package, is that each movie is in a different language which intrigues me. Since I'm watching so many Asian movies recently, I find the languages of the Chinese, Korean, and Japanese to be so different, but then again similar. This is especially true with "Cut" which has the psycho maniac speaking in a totally different Korean dialect which is almost funny to me being a Westerner, and the other actors speaking in the standard Korean language. Not sure why they did that, but the interview with the actor playing the psycho said he had a very hard time learning and speaking that interesting dialect. I had to watch several parts of each movie over again after I finished the first viewing, because it's pretty hard to figure out what the hell's going on with one viewing. I'll never forget those chilling eyes of Ching in the closing scenes of "Dumplings" and that crunching sound as she enjoys her latest and most extreme serving of dumplings. yum yum........ 4 Stars 2-20-14

Three...Extremes is an anthology of three horror films by three respected Asian directors. "Dumplings" - Directed by Fruit Chan In Dumplings, an actress who has entered middle age and begun to lose the attention of her husband to an affair with a younger woman visits Aunt Mei, an old woman who still has the looks of her youth. Aunt Mei has a secret recipe that makes anyone look years younger, but such an unnatural benefit comes from a truly abominable source. I found Dumplings to be absolutely stomach-churning. A horror movie that doesn't even attempt to scare you, but actually tries (and succeeds, in my case) to horrifying you. Not for the squeamish. Even the sound effects eventually became almost more than I could bear. Disturbing and entertaining. - 4/5 "Cut" - Directed by Chan-wook Park A talented director and his wife are taken captive by a murderous, utterly insane movie extra. Cut is darkly comedic, utterly absurd, and far more meta than the other movies in this collection. It took me a while to figure out whether I liked it or not, but by the end of the segment, I was won over. Like Dumplings, Cut isn't frightening in the conventional sense. Instead, it's flat-out zany (in a good way). - 3.5/5 "Box" - Directed by Takashi Miike The most haunting of the three segments. Box is about a jealousy-fueled tragic accident involving two young sisters. The surviving sibling suffers from suffocating (literally) dreams and disturbing visions of her deceased sibling, even years later as an adult. Box is probably the creepiest of the three, and it has a psycho-sexual aspect to it that makes the whole thing even more unsettling. Definitely more of an atmospheric, "mood" movie than the other two. - 4/5 I liked all three segments, as well as the movie as a whole. I found Dumplings to be the most effective/entertaining, but I recommend the entire anthology. The three short films are not only memorable and very different from one another, but they're also fairly unique among the other horror movies that I've seen. Overall - 4/5

While all of them were interesting, the only segment that REALLY got to me was the first film called "Dumplings". It was truly disturbing on many levels and I highly recomend it to those who like that sort of thing. They get progressivly less interesting (in my opinion) from first to last, which is odd because usually they save the best for last on this sort of a project. Having said that, I do think that fans of the genere will enjoy the journey(s).