Throw Momma from the Train1987 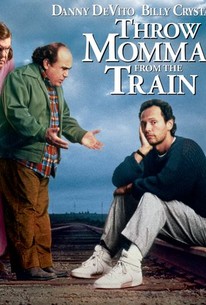 Critics Consensus: Danny DeVito's direction is too broad to offer the kind of nastiness that would have made Throw Momma from the Train truly special, but DeVito's on-screen chemistry with co-star Billy Crystal makes this a smoothly entertaining comedy.

Critics Consensus: Danny DeVito's direction is too broad to offer the kind of nastiness that would have made Throw Momma from the Train truly special, but DeVito's on-screen chemistry with co-star Billy Crystal makes this a smoothly entertaining comedy.

Critic Consensus: Danny DeVito's direction is too broad to offer the kind of nastiness that would have made Throw Momma from the Train truly special, but DeVito's on-screen chemistry with co-star Billy Crystal makes this a smoothly entertaining comedy.

Throw Momma from the Train Videos

Throw Momma from the Train Photos

The "exchange murders" plot gambit, played with utter solemnity in Hitchcock's Strangers on a Train, is used as the launching pad for raucous laughter in Throw Momma From the Train. Director/star Danny DeVito plays Owen Lift, a middle-aged bachelor, totally dominated by his gorgon mother, played with hilarious ferocity by Anne Ramsey. Billy Crystal co-stars as Larry Donner, a creative-writing professor, saddled with a vituperative, thoroughly despicable ex-wife, Margaret (Kate Mulgrew). Signing up for Larry's writing course, Owen has trouble at first with character development and construction in his stories. Larry recommends that Owen watch a screening of Strangers on a Train, which he considered a model of tight, concise storytelling. Owen is so entranced by the film that he decides to emulate Strangers star Robert Walker. That is, Owen wants Larry to bump off his mother, in exchange for Owen's murder of Margaret. Without being asked, Owen does away with Margaret (or so it seems), then hounds Larry to the point of killing "Momma." This being a comedy, the actual consequences of the swap-murder plot aren't nearly as calamitous as in the Hitchcock film. Cinematographer Barry Sonnenfeld would apply the "black humor" lessons learned in Throw Momma From the Train for his own directorial debut, The Addams Family (1991).

Oprah Winfrey
as Herself

Critic Reviews for Throw Momma from the Train

Very clever and engaging from beginning to end, pic builds on the notion that nearly everyone - at least once in life - has the desire to snuff out a relative or nemesis, even if 99.9% of us let the urge pass without ever acting on it.

If it all gets a little soft-centred towards the end, there's more than enough vitality and invention to be going on with.

Mr. Crystal and Mr. DeVito ... make one of the oddest pairs imaginable but have a rapport that's a delight.

"Throw Momma from the Train" is a series of missed opportunities and unexploited situations, a movie that wants to have genuine nastiness at its heart but never quite works up the energy or the nerve to be truly heartless.

You can feel how much fun it was for DeVito to direct this. But the movie's one-note broadness seems suited more to cable.

Better yet, just throw the whole thing in front of a subway and hope it gets dragged a couple of miles.

Throw Momma from the Train is a comic triumph for all involved.

Danny DeVito directs and stars in this funny, offbeat homage to Alfred Hitchcock thrillers, but it's co-star Billy Crystal who brings all the elements together

...a fairly forgettable piece of work that could (and should) have been so much better...

Rich Cline
Shadows on the Wall
View All Critic Reviews (35)

Audience Reviews for Throw Momma from the Train

Ugh! And tie the director to the tracks! This is mindless dreck with a supremely annoying and unimaginative cast.

This isn't funny. I didn't want you to keep those hopes so high like mine were when I started watching this. Comedy films coming out around this time included Planes, Trains, and Automobiles, City Slickers, and Ghostbusters, films with dopey leads, hard hearted eccentrics, and lovelorn women. Many people like to lump this send off to Alfred Hitchcock's Strangers on a Train, with the rest of these gems. Based on reviews from this site, my love of anything Danny DeVito or Billy Crystal, and an admiration of zany hard knocks, I truly wanted to see this flick. Not only that but it seemed like a reinterpretation of Hitchcock's thriller, and to have anyone telling me to go see a re-telling and that it's hilarious to boot, I am onboard. Why does this movie not work? It's crazed. It's supposedly black comedy, but I think you have to have people laugh in order to crush yourself into that genre. The fact that they're both writers adds nothing, Danny DeVitoâ(TM)s role is supposed to stupidly endearing but is just a rip-off of Lenny from Of Mice and Men, and Crystal himself doesn't exhibit his superior, odd, and loudly obnoxious persona that made him famous in When Harry Met Sally and City Slickers. No, here he is an incoherent mess with one frame of mind: to kill his ex-wife who has stolen his book and become a wild success. That would have been fine, had they not pounded it to death. I seriously don't know how this haphazard script came to be, though I know it all got made because Danny DeVito directed it. Here his direction doesn't help anything, and we're left with characters who are neither affable nor realistic, and a plot that ambles wherever it so pleases. The ending, or should I say last ten minutes, is the only section that even features the aforementioned train. The mother, Anne Ramsey who made her mark as Mrs. Fratelli in The Goonies, never speaks any audible dialogue other than a rasp here and there and always there is yelling. She's not scary or annoying here, just simply blah, neither slightly mean tempered nor spitefully evil. She is a nothing character, just like everybody else in this disjointed wretch. The villains don't get punished, no one learns any lessons, and somehow Crystal gets out of his writer's block. Is that because he let go of his hate? Because he was still pretty mean to DeVito at the end of the film. It's just so painful and dull. Watch for the actors and nostalgia and that is all.

A little comedic fun riffing off of Hitchcock's "Strangers on a Train" premise.

I loved this dark comedy! The cast is brilliant, and although the story sort of borrows from Strangers on a Train, and it even admits to doing so, it's really hilarious, and I highly recommend seeing this movie, it's a lot of fun.

Throw Momma from the Train Quotes