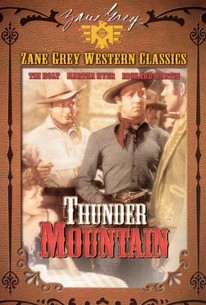 Based on Zane Grey's 1922 novel To the Last Man, filmed previously by Paramount in 1923 and 1934, this fine RKO Western marked the return to his home lot of Tim Holt after a stint in the Army Air Corps. Returning to his Arizona homestead, Marvin Hayden (Holt) lands in the middle of the age-old feud between the Haydens and the Jorths, both families accusing the other of murder. The feud, however, has been engineered by someone else entirely and when the dust settles, Marvin announces his engagement to Ellen Jorth (Martha Hyer). Although both were ostensibly based on Zane Grey novels, Thunder Mountain bears no resemblance to the 1935 George O'Brien oater of the same title.

There are no critic reviews yet for Thunder Mountain. Keep checking Rotten Tomatoes for updates!

There are no featured reviews for Thunder Mountain at this time.