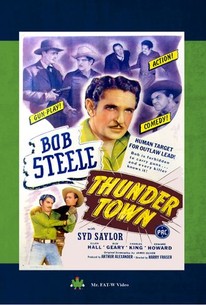 In his final starring Western for PRC, Bob Steele plays Jim Brandon who is imprisoned for a bank robbery and murder he didn't commit. Returning home on parole, Jim is ostracized by all and sundry, except Sheriff Warner (Steve Clark) and Betty Morgan (Ellen Hall), both of whom believe in his innocence. Aided by ranch cook Utah McGirk (Syd Saylor), Jim begins an investigation into the killing of his ranch partner and manages to find the murderer by using a new French discovery, ballistics. In between the fightin' and shootin', Don Weston performs his own "Trying to Forget" and "End of Rainbow Trail."

There are no featured reviews for Thunder Town at this time.