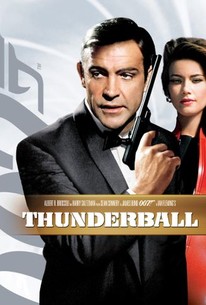 Critics Consensus: Lavishly rendered set pieces and Sean Connery's enduring charm make Thunderball a big, fun adventure, even if it doesn't quite measure up to the series' previous heights.

Critics Consensus: Lavishly rendered set pieces and Sean Connery's enduring charm make Thunderball a big, fun adventure, even if it doesn't quite measure up to the series' previous heights.

Critic Consensus: Lavishly rendered set pieces and Sean Connery's enduring charm make Thunderball a big, fun adventure, even if it doesn't quite measure up to the series' previous heights.

Thunderball finds James Bond matching wits with the sinister espionage organization S.P.E.C.T.R.E, (which stands for Special Executive for Counterintelligence, Terrorism, Revenge and Extortion). This time, S.P.E.C.T.R.E. hijacks a NATO nuclear bomber, hiding the bombs under the ocean depths and threatening to detonate the weapons unless a ransom of 100,000,000 pounds is paid. The mastermind behind this scheme is international business executive Emilio Largo (Adolfo Celi), who maintains a pool full of sharks for the purpose of eliminating enemies and those henchmen who fail to come up to standard. Dispatched to the Bahamas, lucky Mr. Bond enjoys the attentions of three nubile ladies: Largo's mistress Domino Derval (Claudine Auger), British spy Paula Caplan (Martine Beswick, previously seen as a gypsy girl in the 1962 Bond epic From Russia With Love) and enemy agent Fiona Volpe (Luciana Paluzzi).

Suzy Kendall
as Prue
View All

If Thunderball's gimmickry seems to overreach at times, Actor Connery gains assurance from film to film, by now delivers all his soppiest Jimcracks martini-dry.

Slightly bloated Bond, with too much technology for my taste and a climactic slaughter that's a little too mindless to be much fun.

There's visible evidence that the reported $5.5 million budget was no mere publicity figure; it's posh all the way.

The fourth Bond, marking the point at which spectacular hardware began to dominate the series. Sleek and quite fun all the same.

The color is handsome. The scenery in the Bahamas is an irresistible lure. Even the violence is funny. That's the best I can say for a Bond film.

The most overrated movie in the franchise. Of course, it's not without its merits.

As one tends to say when movie franchise stretch well into the double-digits: this is one of the good ones.

Each new Bond movie gains a larger budget, but the potential doesn't equate to greater creativity or superior filmmaking.

The film moves at a leisurely pace, but it still exudes Classic Bond and features some of the finest spy work in the series to date.

This features the ideal realisation of Blofeld - a disembodied voice with shutters obscuring his presence from the torso up. It's far more chilling than in later Bonds.

"...And he STRIKES!!! Like Thunderbolt!!!" (Gotta love that Tom Jones theme song) A bit overlong but still remains my personal favorite Sean Connery-era James Bond film. Great larger-than-life set pieces perfectly balanced out by carefully crafted slow-burn suspense sequences. Terence Young (Dr. No, From Russia with Love) returns to helm and I think this movie demonstrates that he was by far one of the franchises best directors next to Martin Campbell, John Glen, and Sam Mendes. Connery gives probably his most self-assured performance yet as James Bond and Fiona Volpe (played wonderfully by the beautiful Luciana Paluzzi) remains one of my favorite femme fetales of the series next to Xenia Onatopp of "Goldeneye." The usual make-or-break element of this film are the extensive underwater sequences, but personally I love them. They are gorgeously shot and the epic underwater battle between the good and evil Spectre army is fantastic.

"Thunderball" may not be a crowd favourite, but I really got a kick out of the story in this film and how well the underwater action scenes presented themselves. The action is top-notch and I could easily re-watch this film for that reason alone. As always, the acting is fantastic by the entire cast, especially Sean Connery, and all the elements of a great Bond film are present. It is definitely not without it's overlong running time, but if you sit through the film and be patient, you will get was you deserve. This film has great direction and very solid effects for it's time. "Thunderball" is one of the better bond films I've seen.

Though the gadgets get too gimmicky and the climax feels like anything but, 'Thunderball' is significant because it is carried by Connery's most assured performance as Bond.

This is the fourth entry in the James Bond series, and this timearound Bond once again finds himself squaring off against international criminal organization S.P.E.C.T.R.E.- specifically their member Emilio Largo- an eye patch wearing nut job who drops enemies and ineffectual henchman into a tank full of hungry sharks. Largo has hijacked a NATO nuclear bomber and hidden the bombs in the ocean depths. He gives the British government one week to pay him a ransom of 1,000,000 pounds or else he'll launch the weapons. Well, it doesn't take long before Bonds sets of for Nassau to foil this diabolical plot, and he's get a few beautiful woman to accompany him along the way. This is a fun one. It's Connery (once again), and, while he's not as strong as he was in the previous two entries, he's still quite strong here, and very comfortable with the role. It's a solid film, but maybe one of my least favorite of the Connery era. It's not a bad movie, just not quite as exciting as some of the others. It's a bit goofy, but I think it really only adds to the charm. Plus, we get some great underwater scenes, and those are quite well done, especially for the time period. Those are some of the best parts, but the cinematography in general is quite good, and there's some okay land sequences as well. With a decent title theme from Tom Jones, a fine score in general, and an entertaining title sequence, this is a really fun movie, and a decent entry in the long running series. Give it a go.