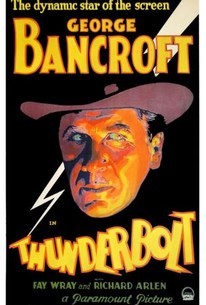 Thunderbolt was Josef von Sternberg's first American talking picture. George Bancroft, a von Sternberg regular (despite frequents clashes between the two men), plays a death row inmate who may be on the eve of eternity, but who has still one more murder on his mind. He plans to kill the young lover (Richard Arlen) of his former girl friend (Fay Wray); fortuitously the lover is incarcerated in the same prison where Bancroft awaits the chair.

King Tut
as The dog
View All

With streaks of shadow and jolting contrasts of light to match the film's eccentric lurches between violence, comedy, and onscreen musical performance... Sternberg evokes a nerve-jangling city of macabre menace.

A museum piece, then, for Sternberg completists only.

There is nothing edifying about this production, and it is hardly an entertainment.

This one is foolish.

Probably the most underrated of Josef von Sternberg's sound pictures.

Brilliantly filmed tale of romance and the underworld.

Serving as proof that Josef von Sternberg did make fine films before The Blue Angel, Thunderbolt is a bizarre gangster picture which is as much a romance as a thriller.

There are no featured reviews for Thunderbolt at this time.