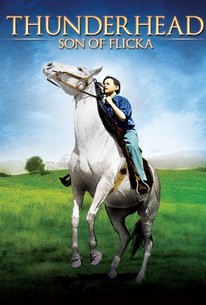 This sequel to 1943's My Friend Flicka stars Roddy McDowell, recreating his role in the earlier film. The son of a horse rancher (Preston S. Foster), McDowell takes it upon himself to train Thunderhead, a white colt with the same rebellious streak that distinguished its mother (Flicka). Thunderhead helps McDowell round up several horses that had been stolen from his father, and also attracts the attention of a racing aficionado (Ralph Sanford). Once fully grown, Thunderhead indicates that he'd be happier running wild, so McDowell tearfully but proudly gives the horse his freedom. Like My Friend Flicka, Thunderhead, Son of Flicka was based on a novel by Mary o'Hara. The original film would engender one more sequel, Green Grass of Wyoming (48), and later would inspire a brief TV series.

Critic Reviews for Thunderhead---Son of Flicka

There are no critic reviews yet for Thunderhead---Son of Flicka. Keep checking Rotten Tomatoes for updates!

There are no featured reviews for Thunderhead---Son of Flicka at this time.