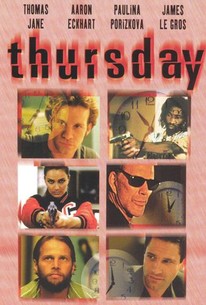 Skip Woods made his directorial debut with this film, caught in a crossfire between thriller and comedy. After violence is unleashed in the opening sequence, the story settles on former L.A. drug dealer Casey Wells (Thomas Jane), now a Houston architect living with his attractive wife Christine (Paula Marshall). When past partner Nick (Aaron Eckhart) arrives out of the blue on a Thursday, asking for a place to stay for a few days, Casey invites him in but later gets curious about Nick's briefcase. After he opens it to find a huge helping of heroin, panic sets in, and he flushes it all away -- setting the stage for a variety of hoods and hitmen to turn up on Casey's suburban doorstep. Shown at the 1998 Toronto World Festival.

Sam Miona
as Businessman
View All

The Weekly Ketchup: Beyonce Gets Dissed And Defended, Sam Raimi Gives Some Hints On The Next Two "Spider-Man" Movies, And More!
"Swordfish" Scribe to Tackle Diesel’s "Hitman"

A vehemently cynical, abrasive, and intense picture full of stylized gangdom inhabitants, it's at once entertaining, off-putting, and hilarious.

A gangster film that hopes to duck the bullets flying overhead and become a comedy.

Believes that shock value in and of itself equals hipness. In actuality, it only equates to pathetic desperation.

One of the many Tarentino rip-offs of the 90s, but definitely one of the good ones. Good work from all involved, especially Aaron Eckhart and Michael Jeter, the always underappreciated character actor. The script and storyline had strong elements of black comedy, and the multiple storylines were put together pretty cohesively, though some were definitely stronger than others. The violence was incredibly graphic, yet it was consistently so, and seemed befitting of the tone. It certainly doesn't have the same polish of a Tarantino vehicle but has enough good elements to make it an interesting ride. 3.5/5 Stars

A droll, dreary, and distasteful mess. Violence in cinema is fine, as long as there is reason to use it. Thursday presents brutal violence without reason. It just throws it onto the screen and tries to tone it down by adding a funny joke at the end. That, sir, is not black comedy.

fascinating, original black comedy that jump started the careers of superstar Paulina Porizkova(Intern, female perversions) and a-list director Skip Woods (Thursday). needless to say this is a very funny black comedy that is not only fascinating, but original. Also known as the film that influenced QuentinTarantino to write Pulp Fiction!

A "Tarantino" style film with plenty of psychotic characters, lots of drugs, bloody violence, and explicit nudity. What more can you ask for in a movie? "Casey is a former drug dealer who quit the business to become a family man, he currently lives with his wife and works as an architect. Everything is normal, he hasn't been related to the drug business in years, but one day his former partner Nick stops by his house and gives him some heroin, which Casey throws away. This is where all the problems start, Casey starts getting 'visits' from people who are looking for that heroin. First is the Rasta Man, then comes Dallas after that comes Billy Hill and finally a cop named Kasarov. To make things even worse, in the middle of all of this Casey gets a visit from Dr. Jarvis who wants to interview him to see if he's able to adopt a child, which is what Casey and his wife were planning to do." This movie is a hidden gem, unknown by most. It's a graphic little crime thriller with many memorable scenes. The acting isn't all that perfect, and the script isn't too original, but hell this is one fucking fun movie! It's very funny at times also, in a deranged kind of way. Dallas, played Paulina Porizkova, portrays one of the sexiest evil bitch's that I've seen on film. She is definitely a huge highlight in this movie. The rape scene that involves her forcing sex on Casey, played by Thomas Jane, is jaw dropping and totally stunning. I never thought that a rape scene can actually be so erotic, but then again, I never really saw a movie where a woman rapes a man(a drop dead gorgeous woman for that matter). Oh boy, have the tables turned this time around, lol. It seems one of the movie's biggest influences was "Pulp Fiction", and all though not as good, Thursday is still a very fun and entertaining watch! Just try to be a little open minded when seeing this and I'm sure you'll enjoy it. Violent and darkly funny..."Thursday" is a must see! Highly recommended.